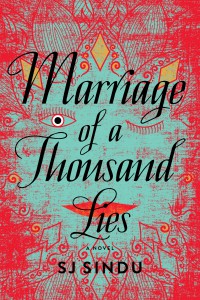 I’d looked forward to reading Marriage of a Thousand Lies since I glanced it on Lesbrary, and my initial reaction after finishing it was that of elation, but there was a pit left in my stomach. At first, I couldn’t understand why, but the more I pored over S.J. Sindu’s book, it began to make sense. Let’s break down the good and bad of this book:

There are so few books with South Asian representation, even few yet with LGBTQ+ characters, and even less still with that character as the main character. Having a lesbian character in a realistic setting, fighting against her parents who believe in and strictly adhere to a culture that has failed them, was so relatable it hurt. But therein lies the problem. Sindu writes in a way that comes off as surreal, dreamy, but the content is harrowing, painful. I actually think that’s a perfect mix to keep the reader going without bogging them down with too much heartache.

See, there is nothing inherently wrong with the book: it’s a fairly realistic and sobering portrayal of toxic parents in a toxic culture which bleeds into the main character’s own actions. There are a fair amount of points where she responds with the same toxic and controlling behavior she’s been raised in. Realistic. So, in one way, it’s cathartic to read about something so relatable. But, in another, it left me with a sense of hopelessness.

I realized the main issue I had: This book wasn’t about a lesbian South Asian woman who rose above all odds, it was a book about said character who was barely able to scrape by and finally managed to begin to process of cutting herself free from her toxic family.

This is not to say I wouldn’t recommend the book. I would certainly recommend it with a warning. Anyone who wants to read this book should mentally steel themselves, or at least be mentally prepared about the harrowing ride this book can take you on. The more you can relate to it, the more it’ll hurt.

But, in the end, it is great to see a story revolving around the hardships of a first generation Southasian background, and I hope to see more kinds of niche representation, South Asian or otherwise, until it’s no longer so niche!