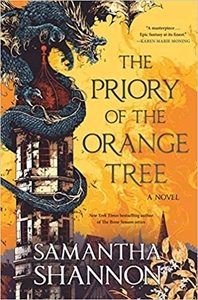 The Priory of the Orange Tree is an epic fantasy standalone that features characters across the world struggling with the re-emergence of a thousand-year-old threat. At the beginning of the story, Ead is a lady in waiting in the court of Sabran the Ninth, hiding forbidden magic and a secret mission to keep the Queen safe. Loth, the Queen’s best friend, has been sent on a deadly mission by the Queen’s spymaster. On the other side of the world, Tané is in training to become a dragon rider, but her life is altered by a chance encounter with a foreigner on a beach. Niclays is living his life in exile, but Tané’s decision will pull him out of obscurity. From there, Shannon weaves a truly fantastic plot, taking the reader on a wonderful journey before bringing the threads from all over her world together for the conclusion.

There is a lot to love in this book. Any book with pirates, magic and dragons is something I will love, but this one included so much more. Shannon roots her world in real world history, as well as a number of myths and legends, which gives the book a really solid grounding and makes the whole thing seem real. Having characters from different parts of the world really adds to this realism, because we get to see different cultures in detail, as well as how they overlap. The characters all have different viewpoints on the world, but they are all engaging and interesting to read about. I particularly loved Ead and Tané’s journeys. I will say that I found different viewpoints less interesting than others at certain points in the story, but that’s a problem I have with most books that balance so many perspectives.

Ead’s plotline involves a slow burning sapphic romance and it was absolutely delightful! It developed slowly, but in a way that left it feeling inevitable, and I rooted for the characters to be together so much. I also really appreciated that the barriers to lgbtq+ characters being together in this book were rooted in class, duty and circumstance, rather than in homophobia.

The pacing was a little off in places: the first half of this book was quite slow, with Shannon taking her time to build up the intrigue in Sabran’s court and to introduce you to the world. I had no problem with the pace picking up as the book went on, but it sped up so much that it felt like there wasn’t quite enough time to do justice to the big finale at the end. It perhaps suffered slightly from trying to balance so many characters and such an epic plot in a single book. That said, the conclusion was still very satisfying, and the work felt complete as a standalone.

This wasn’t a particularly new or inventive fantasy–if you’ve read much of the genre, you’ll probably find this book feels familiar to you. However, I don’t think that’s a bad thing! I’ve never seen this kind of story with a sapphic relationship taking centre stage before, and I absolutely loved it. It was so nice to see myself represented in the kind of fantasy story I loved growing up. Overall, this was a really enjoyable and accessible fantasy, and I’d really recommend it! 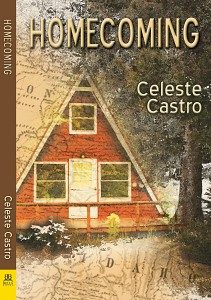 Homecoming is like a fireworks show: it starts with a boom, but everything leads to the grand finale. This slow burn romance is full of unexpected adventure and forced self reflection for the main character, Dusty and love interest Morgan.

Destiny “Dusty” del Carmen is a successful author and activist who has made a habit of avoiding her own emotions and relationships in favor of one night stands. She has spent 15 years trying to avoid her hurtful past. When Dusty is forced by her agent to return to her home state of Idaho, an unexpected situation presents her with an opportunity for self reflection and healing.

Morgan West is self proclaimed workaholic and actual over achiever. Department Chair at Boise State, she has her hands full with work commitments and ensuring her students success. She spends her time taking care of everyone but herself, and her on again off again relationship with a colleague is hardly the relationship of her dreams.

Dusty and Morgan meet unexpectedly and then are thrust together in a high stakes crisis. This might be just the thing they need to get out of their own way.

Castro’s storytelling style offers the reader intrigue and anticipation. Dusty’s life and family history unravel slowly as the story goes along, allowing the reader to put the puzzle pieces together in a meaningful way alongside Morgan. Additionally, the reader is privy to some information before the characters themselves know it and that creates a wonderful sense of excitement. These style elements and shorter chapter structure make Homecoming a page turner.

Castro has spun together a romance full of situational tension and excitement on top of the sparking sexual chemistry. She expertly weaves in location based details that really bring the story to life and capture that small town feel.