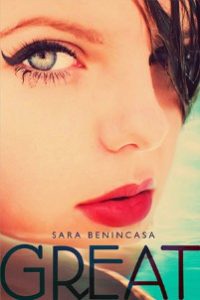 Every summer, Naomi Rye leaves her home in Chicago to spend her holidays with her mother in East Hampton; a condition of her parents’ messy divorce. Her ambitious mother Anne built a multi-million-dollar cupcake empire from nothing, and now Anne climbs the ranks of the social elite with the same drive. Anne also believes that the easiest way to secure a powerful place in the inner circle of the Senator’s wife, is through their children. From a young age, Naomi is forced into playdates, dinners, charity events and everything in between, with the senator’s daughter Delilah. The summer Naomi turns seventeen, Jacinta – the mysterious summer tenant next door – throws a lavish party. She invites Naomi in the hopes that their new friendship will bring Delilah into her life in turn. Sound familiar?

This modern twist on The Great Gatsby was a delight, through and through. I may have a bit of a bias; I read Gatsby for the first time at the age of thirteen, and it has held a very special place in my heart ever since. It was the first book I read in which I hated every character, and still came through moved by the power of the prose. Gatsby taught me that a writer could fill pages with selfish, ugly people, and still create something beautiful.

Once Great came to my attention, I couldn’t not read it. However, there was some initial concern that without the prose, I would just be left with a bunch of rich people whining and making bad decisions. I mean, honestly, guys, I didn’t even make it past the first season of Gossip Girl. But man oh man, did Sara Benincasa pull it off. Her attention to detail is marvelous, and she keeps the tale from becoming stagnant with a small – but key – number of original side characters. Naomi’s parents and her hometown best friend Skags are not given large roles, but they keep things fresh and interesting.

In that it’s a book fashioned after one known for its vapid, superficial characters, there are a few icky things to note; number one being the ‘positive’ speech about pursuing thinness and envy of people surpassing “even LA thin.” Anyone with body image-related issues or disorders may want to proceed with caution. There is also a heavy dose of homophobia from the rich folk, and Naomi herself plays the Poor Straight White Girl card on occasion – though her butch best friend is quick to call her out on the behaviour.

All in all, Great is a wonderful, true to form take on The Great Gatsby. It’s short and dark and perfectly suited for an afternoon of wallowing on the couch. Just keep in mind that it isn’t the sort of book one goes for when looking for a fluffy pick-me-up.