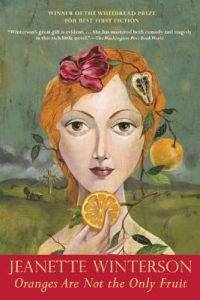 Trigger warnings for mentions of homophobia and abuse

The relationship between sapphic women and Christianity is a complicated and sometimes tragic and violent one. Oranges Are Not the Only Fruit is a semi-autobiographical story based around the author’s life raised by an evangelists in an English Pentecostal community while discovering her attraction to women.

Jeanette is devoted to her religion and the Christian path her mother has determined for her. She’s admired for being a good Christian girl and absolutely faithful to her community. That is, until she falls in love with another girl, Melanie.

Jeanette and Melanie are forced to undergo exorcisms at the church. Melanie, who has always been the more subservient and less confident of the two, repents. Jeanette refuses and is locked in her parlor by her mother. This whole process takes several days and the author does not shy away from it, probably because she experienced something close to, if not that exactly as it was.

Jeanette eventually pretends to repent simply out of a desperate need for food. However, she remains steadfast in her belief that nothing is wrong with her love for Melanie and that she can maintain that love alongside her faith.

Her church takes an opposite perspective, turning to hate her in a snap judgement of her different sexuality. Jeanette finds herself alone, without the love her community that she was so devoted to.

The bravest part of Jeanette is that despite all of this not only does she not stop loving herself, but she never stops being compassionate and kind. She doesn’t let the hatred of her church sink her from her beliefs in her religion or herself.

The book does a great job of showing how the hatred of the Church members is so contrasted by Jeanette, the lesbian’s, purposeful love, kindness and faith. This book was published in 1985, a time when such depicts would have been shocking. The author takes her time to show the community and it’s members, so you grow attached to them alongside Jeanette, and then feel the same pain she does when she is rejected.

The story is empowering in Jeanette and her ability to take everything in stride and continue to love herself and those around her.