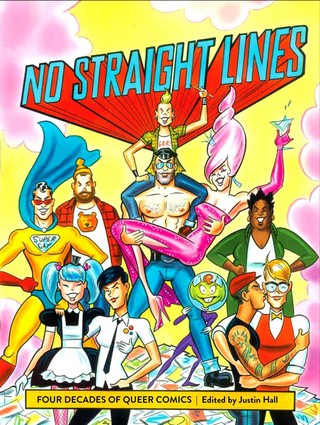 With those disclaimers, “No Straight Lines” is kind of a literary wet dream.  It’s a queer comic anthology that does an impressive job of not only showcasing the best of the last forty years of queer comics, but also giving an sensitive and interesting look at the development of the queer identity.

We begin with a fascinating introduction by editor Justin Hall.  While addressing the conceit of the book, Hall’s introduction also serves as a crash course for those of us, myself included, who don’t know much about the origins of queer comics.  It creates a nice frame of reference for the comics that follow.

The body of the book is divided into three sections: “Comics Come Out: Gay gag strips, underground comix, and lesbian literati,” “File under Queer: Comix to comics, punk zines and art during the plague,” and “A New Millennium: Trans creators, webcomics, and stepping out of the ghetto.”  From there the comics are presented without comment as they were originally published.

In the first section we see the early uses of the comic medium to express a queer voice as well as some really amazing Gertrude Stein and Alice B. Toklas paper dolls.  Although lesbians are openly depicted, it is obvious that the cartoonists were still grappling with the sense of “wrongness” associated with the lesbian identity.  Lesbian characters in these comics are shown living within the gothic trope of the madwoman in the haunted castle, imprisoned by a society with satirically harsh laws against homosexuality or having to flee or escape from conventional society.  While these scenarios are all painted in a humorous light, often reclaiming the tropes, there is also a serious attempt to address the mainstream perception that lesbianism is something wrong.

This process is best illustrated by the short comic by Joyce Farmer in which a young girl has a crisis of identity when she realizes the knight she has been fantasizing about is really Ingrid Bergman in drag for the movie “Joan of Arc.”  I myself had a similar crisis at around the same age, except there was no suit of armor to skew Ingrid Bergman’s gender identity in “Casablanca.”  But unlike me, the girl in Farmer’s comic only finds herself in crisis after she is attacked by a friend for her interest in Ingrid.  In contrast to most of the comics in this section, in the last panel we see her wondering what could be wrong with her.

Moving from general perceptions of the queer community, the second section deals specifically with the AIDS virus and its catastrophic effects.  The section begins with one of the few color spreads of the volume, a beautiful and heartbreaking piece from “7 Miles a Second” about the sheer rage that transforms the speaker into a giant, depicted smashing through the steeple of a church.  In the pieces directly relating to the impact of AIDS, there is an increase of shadows and darkness in the art as well as breathtaking honesty.  For someone like me, who was too young to know the worst of the AIDS crisis in America, these comics felt incredibly real and demonstrated how important it is to keep telling those stories.

The act of telling these stories also brings an increase in the first-person narrator.  The earlier comics were often narrated by an outside voice or without a narrator, but as the subject matter becomes more internalized, we see the development of a queer autobiographical voice.  These first-person story-comics were some of my favorites in the book including a gay man’s experiences in Israel (“Weekends Abroad” – Eric Orner) and a beautiful retrospective of a relationship (“Emile” – Fabrice Neaud).  The lesbian comics featured use this voice to explore the creation of  lesbian space; a place were a lesbian identity could flourish away from the rules and moulds of heteronormative society.  There is an effort to define and redefine lesbian stereotypes in comics such as “Bitchy Butch, the world’s angriest dyke” (Roberta Gregory) to give them more depth and clarity.  But such redefinitions often fell flat for me because those stereotypes have morphed in the years since those comics into something else entirely.

The move towards re-identity and re-definition of a lesbian or queer experience carries us out of the second section and into the third.  Allison Bechdel gets straight to the point of the with her comic, “Oppressed Minority Cartoonist,” in which the lesbian label is limiting rather than defining and she would rather simply be a cartoonist.  New voices emerge in the form of trans and genderqueer creators and we see an exploration of new ways to be queer and their impact on the preexisting queer community.   The trans voice is fascinating, but I felt like a lot of the comics dealt with issues that I had just seen comics exploring in the first part of the book.  There is a return to the justification of a queer identity against societal pressure and an anxiety about being gay that hadn’t felt as prevalent in the comics of the eighties and nineties.  I don’t know if this is a product of today’s society as being queer is often fetishized by mainstream media while at the same time our social and political rights continue to be jeopardized and attacked.

As Hall readily admits in his introduction, it is always hard for an anthology to cover everything.  Many of the comics included are selections from longer works and I was often left with a feeling of missing a larger story.  They also struggle with alienating younger readers such as myself.  While stories from the early years of AIDS brought me clarity there were plenty of references and scenes that simply went over my head.  But comics Hall has included present the artist growth and development of a community through four decades and a wonderful piece of queer history.