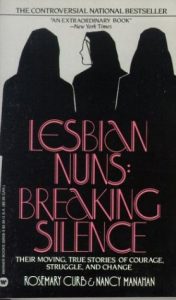 Growing up in a Catholic family and Catholic environment as a lesbian had its challenges. As a young girl, I thought that I would become a religious sister because the idea of living in a community of women seemed much preferable to getting married. You know, back when I thought that getting married automatically included a man. I don’t think it should come as a surprise that lesbian/bi women have been joining religious orders for centuries, finding that life with other women is better than married life with a man.

First published in 1985, Lesbian Nuns: Breaking Silence by Rosemary Curb and Nancy Manahan is a nonfiction anthology with 51 accounts of lesbian nuns and ex-nuns, speaking on the topic about how their sexuality intersects with their vocations.

The success of this book has an interesting story. The Boston archdiocese contacted a news station and appealed for the cancellation of a televised interview with one of the book’s editors. The Boston Globe wrote an article about the censorship, and Lesbian Nuns almost immediately sold out of its first printing with indie lesbian publisher Naiad Press. Shortly after, Warner Books bought the rights for mass-distribution and spread the book far and wide with its second edition. In the book itself, one interviewee said:

One of the contributors to this book might be familiar to some Lesbrary readers. Jeanne Cordova is the author of one of the first chapters, and she is also the author of Kicking the Habit: a Lesbian Nun Story and When We Were Outlaws: A Memoir of Love & Revolution.

The other stories and authors will likely be new to readers, and I think impactful in the way they mirror each other with shared experiences and ideas. Certainly, it was impactful for me with my Catholic background. There were several times that I felt like saying, “Hey! Those are my feelings, too!” There’s so much power for me in connecting with other lesbian women from the past, both distant and not so distant.

“My pain is that I can’t share being a Lesbian with most of these women. Since my Lesbianism is a part of me, they don’t really know me. Yet, if they knew I was a Lesbian, they might know me even less, because of whatever homophobia, stereotypes, or projections they might have. Another source of pain is my Church. I’m not sure what kind of a Catholic I am. I like the Catholic traditions and my personal history. However, I cannot reconcile myself to the Church’s clericalism and sexism.”

I may not personally prefer to capitalize the “l” in lesbian or call my sexuality an ism, but this passage and others truly resonated with me as an ex-Catholic. In fact, regardless of readers’ connections with Catholicism or other religious beliefs or nonbeliefs, I think this book has something for everyone to recognize in themselves.

The book is divided into nine themed sections, including sections on “particular friends”, the relationship between being a lesbian and vows of celibacy and chastity, and women who chose to stay in their religious orders rather than leave. It’s fascinating to read each section and find such similarities and differences in these women’s stories.

There is so much to learn from this book. It is full of first-hand accounts and the personal histories from our lesbian heritage. Catholic or not, religious or not, I highly recommend picking up a copy. Although originally published through an indie publisher, this book has since been reprinted several times and is available widely for anyone interested in exploring the relationship between religion and homosexuality.