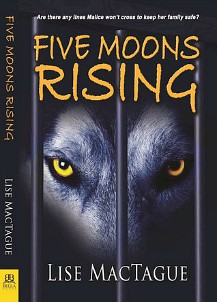 Malice, known as Mary Alice to her family, is a trained hunter for paranormal creatures. Ruri is the beta werewolf of her pack, has been around for a couple of centuries, and is not a werewolf to be trifled with. Both their lives are shaken when Ruri’s pack is taken over by a violent, loner Alpha and Malice’s sister Cassidy is caught in the crossfire. She and Ruri are thrown together by forces of fate, and while they should hate each other, they can’t help be drawn to one another.

This was a great book! I love werewolves, so I was already on board, but this went beyond my expectations. I really appreciate some good, old fashioned angst, and this not only served the angst but also offered up seconds.

I love the characters! Malice was wonderfully stoic, putting on the airs of a cold and brutal hunter, while having this secret need for intimacy she won’t even admit to herself. Ruri was also great, a tough and formidable werewolf (or wolven as the characters in the book choose to be called) with a soft inside. There were also the other werewolves, hunters, and some intense vampires, as well as Cassidy. She takes a big role in the book and it was also interesting to see her character develop and change alongside Malice and Ruri.

The romance was perfect. Malice and Ruri have such great chemistry, but beyond that I was able to get a sense that these are two people who need each other and work well with one another. They’re both just as similar as they are different. I enjoyed watching their relationship slowly grow through the novel.

My one gripe about this was how the romance was resolved. It felt a bit rushed in the end and I was hoping for just a little more angst, conversation, and action. But I was still satisfied with where things ended up.

The overall plot about the violent Alpha and the world building as a whole really came alive for me. With some paranormal romances, I can get a bit bored with the villain and exposition, but MacTague did a great job creating a plot and world that drew me in. I would love to see more books set in this world even if they didn’t include these specific characters (but I’d really, really love to see more of these characters).

In the end, I would definitely recommend this to anyone looking for a great paranormal romance. This also works really well in the enemies-to-lovers subgenre, which I’m always a fan of.