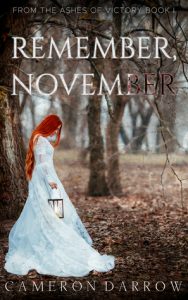 Remember, November follows Millie, Elise, Victoria, and their coven of witches as they learn their powers in the aftermath of World War I. The coven is under the employment of The Allied Directorate for Alternative Means (ADAM), a government-sanctioned operation that wants to use magic to fight wars.

On Christmas night, Victoria goes missing. The split point of view narration reveals that she has lost her memory and doesn’t know she’s a witch. After a series of strange mishaps that seem impossible, she submits herself to the mercy of a psychiatric hospital, hoping to find answers. But the kind doctor and hospital are not all they appear to be. It’s up to Millie and Elise to rescue their lost friend.

The mysterious plot combined with historical fiction and a bit of romance between Millie and Elise make this novel a delightful read. It’s easy to keep turning the pages as the action never gets bogged down in too much detail. The moments of character development give the reader an opportunity to breathe and get inside the characters’ heads.

Each character has a strong, distinct voice that makes readers want to get to know each one on their own. But that doesn’t mean their relationships with one another fall by the wayside. The bond that is created between the three new witches as well as their mistresses, ancient witches who are mentoring the new generation, comes through clearly as they do anything and everything to protect one another.

While the writing is strong and compelling, it’s not particularly tight. There are moments where the story is hard to follow because typos and convoluted grammar make it hard to follow. It felt like the book needed more effective editing before going to publication. But the narrative is still strong enough to keep readers wanting more.

Darrow’s writing ability shines through during moments of introspection. Each main character is developed within their own thoughts. As Millie and Victoria navigate their world and consider their relationships with other characters, their voices are clear and distinct, making them complete and rounded-out people. It’s an impressive feat with Victoria, as for most of the book she is without her memory.

The novel establishes Elise and Millie’s romantic relationship early on. But for fans of a slow burn, their pining makes up a great deal of this romance. Everything about their feelings always feels genuine and organic. Millie’s characterization is especially sweet as her demeanor softens when she’s around Elise, whereas with others she tends to be sarcastic.

As the story unravels and readers go along for the ride, there are clues and details that may lead them to certain conclusions. That’s why the plot twist with how Victoria lost her memory packs a powerful punch. It’s a possibility that doesn’t pop up at the top of the list of answers to the question, “What happened?”