Chloe Green and Shara Wheeler have been academic rivals since Chloe arrived in this Christian small town high school with its suffocating rules and homophobic culture. But at prom, as the fight for valedictorian is almost at a close, Shara kisses Chloe and disappears. She soon realizes Shara kissed two others that night: her boyfriend, Smith, and the broody boy next boy, Rory. She’s also left a series of clues for them on how to find her.

If this sounds like the plot of a 2000s-2010s YA novel to you, Chloe agrees, who says Shara has cast herself in a John Green novel. Chloe resents Shara: she’s the golden girl of Willowgrove Christian Academy. She’s pretty and blonde and has a quarterback boyfriend, straight As, and lights up every room she walks in. She’s the principal’s daughter. She can do no wrong.

Chloe feels like the opposite, like an outcast. The only thing they have in common is their GPA. She is out as bisexual in a school where no one else is out as queer. In fact, one of her moms was the first person to come out at Willowgrove when she went there, and it hasn’t seemed to have changed much. Chloe hates this town, this school, and her classmates who seem to thrive there. Her friends are the other rejects: closeted queer kids and theater nerds.

She’s not going to let Shara swan out so easily, not when she’s so close to showing her up. She wants to prove to everyone that she is better. So she wrangles together Rory and Smith to find her. They were once best friends and now can barely speak to each other, especially now that Shara kissed both of them.

Each chapter counts down how many days since Shara left and how many days until graduation, giving the chase the tension of a clock ticking down. Also, who can resist a scavenger hunt? Chloe becomes obsessed with these letters and clues: how they reveal that Shara wasn’t the angel everyone thought she was, just as Chloe always suspected. How Chloe is cracking the code and proving herself smart enough to find Shara. In fact, she’s so obsessed that she stops paying attention to her friends, who she hasn’t told about the clues, and even her schoolwork.

When discussing sapphic characters online, there are some common labels of “disaster bisexuals” and “useless lesbians.” Somehow, the sapphic main characters in this book manage to both be useless disasters. Shara and Chloe are obsessed with each other, and anyone reading will know — even if this wasn’t a romance novel — that they’re in love with each other. But they’re so wrapped up in their rivalry and the lies they’re telling themselves that they can’t see it.

While Chloe and Shara seem to be in their own world, there’s a whole other story unravelling outside of these two characters. This story has a lot of say about growing up queer in a Christian conservative small town. Chloe can’t wait to escape (just like her mom did before her, though she came back), but others find value in this town and want to fight to make it better. Chloe also slowly starts to realize that her view of Willowgrove is limited, and it’s not as straight and cis as she assumed, even if students aren’t out.

I was intrigued by the premise of this one, with the scavenger hunt and mystery element, but it began to drag for me in the middle. I love a flawed main character, but both Chloe and Shara are sometimes insufferable, with extreme tunnel vision. Then the story changed gear, and the ending chunk pulled me back in with the emerging storylines from other characters. It was also fun to see Chloe and Shara bounce off of each other: they are both so stubborn and opinionated that their collision is intense — that is, until they realize they might want the same thing after all.

You probably don’t need my recommendation to read this: it is Casey McQuiston after all, but you have it anyway. If you want a rivals to lovers F/F scavenger hunt YA romance that steadily gets more queer as you go along, pick this one up. 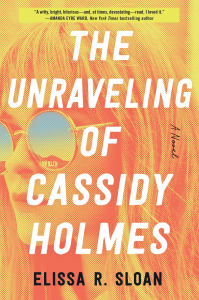 I’m ashamed to admit I have always preferred boy bands to girl groups. I was a massive One Direction fan back in the day, and still have so much love for each of the boys (especially Harry <3). However, despite my unfamiliarity with the girl group/pop genre as a whole, when I saw The Unraveling of Cassidy Holmes as an option for my August Book of the Month, I knew I had to give it a try. The Unraveling of Cassidy Holmes is an exploration of the destruction of the most famous 2000’s girl group, Gloss, as they come to terms with the death of one of their bandmates, Cassidy Holmes. We flashback between Cassidy’s perspective during the top of the group’s career in 2001, to the future as each member of Gloss–Merry, Yumi and Rose–comes to terms with their relationship to Cassidy, and to fame as a whole. Darker than the initial saccharine bubblegum evoked by the era, The Unraveling of Cassidy Holmes sinks its teeth into the black heart of the music industry by exposing the unhealthy image consciousness, rampant closeting and bearding, and abuse of power by men in the media that still persists today.

I may be too young to fully appreciate the novel’s noughties nostalgia, as I recently turned 20, but I did find remnants of my childhood in Cassidy’s treasured flip phone and the celebrity gossip buzz surrounding the fictional red carpets, reminiscent of the infamous Taylor/Kanye feud and other iconic awards show moments. Albeit, I have more nostalgia for the “Britney/Brittany” episode of Glee rather than Britney Spears’s actual career, but I definitely suggest this book if you have a strong attachment to the era, as each of the fictional celebrities leap off the page and seem as they could be really stars on MTV and tabloid columns. I also recommend listening to the author’s curated 1990’s/2000’s pop playlist in the back of the book as you read for deep immersion into the years of sequined Juicy tracksuits and frosted tips.

The comfort of the time period led to an easy read (I read this 400+ page book in a day), but I had some issues with pacing and timing. The author would foreshadow something, and then immediately reveal it in the next chapter, instantly killing any sense of anticipation that could have been built up.

I loved hearing each of the girl’s perspective on fame and how the industry changed their lives, for better or for worse. Yumiko’s storyline was the most fleshed out and poignant; Yumi discusses the challenges of being a Japanese woman in the media, and her experience with racism, fetishization and cultural appropriation. Merry’s story regarding her abusive past also rang true, evoking echoes of the #MeToo movement, as the group’s abusers received their comeuppance in the modern day. However, I wish there was more of a discussion of Cassidy’s mental health from her perspective rather than those around her. I can understand that this book does focus the feelings of questioning and misunderstanding of those attempting to come to terms with a close one’s suicide, but I would’ve liked to see more of Cassidy’s mental health struggles in her own words, rather than from her friend’s speculation.

My least favorite member of Gloss was Rose, Cassidy’s love interest. I enjoyed having a morally grey sapphic female protagonist, but I felt that she was very manipulative and dismissive of each of the girl’s needs. If the author wanted me to root for Rose and Cassidy’s burgeoning romance, then it needed to be fleshed out more with more attention to Rose’s tender side, which we only receive brief glimpses of. I would have preferred the love story if Cassidy fell for Emily, her sweet and steadfast dog sitter.

I also found the discussion of Rose’s coming out as a publicity stunt and the implication that she would be celebrated and gain popularity for her coming out as problematic. So many individuals have lost their careers, their audiences, or even their lives for being brave enough to come out. I felt that it was frankly dismissive of out and proud musicians and the struggles they’ve faced; Harry Styles has taken considerable flack for his androgynous clothing choices and rejection of sexuality labels, and Laura Jane Grace of Against Me! lost members of her punk community audience after coming out as a transgender lesbian. Equating the real life struggles of LGBT individuals to a simple plug for diversity and public clout is fraught and simply not true.

The Unraveling of Cassidy Holmes is a reflection on what it means to be a woman in the music industry. We are right by Cassidy’s side as she faces homophobia from the media, gaslighting by the men in charge of her music and image, and an ever creeping sense of dread as her mental health struggles loom larger and larger. The Unraveling of Cassidy Holmes exposes the ugly sides of our current celebrity culture and illustrates the true tradeoff between happiness and fame.