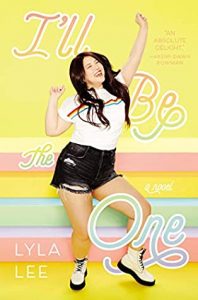 If you’re looking for something to make you smile just as much as it makes you think, Lyla Lee’s debut I’ll Be the One is the perfect book for you. It’s categorized as young adult romance, but don’t let that put you off. I’m in my forties and I loved every second I spent with these characters.

Skye Shin has grown up knowing she wants to be a K-Pop star. She’s devoted every spare moment to practicing both her singing and dancing, and even though those around her haven’t always been as supportive of her dreams as she might like, she’s determined not to let this get her down. Sure, she’s a self-professed fat girl whose mother is constantly telling her to lose weight before taking the world by storm, painful to be sure, but if her deep love for K-Pop has taught her anything over the years, it’s that she has to believe in herself one-hundred percent, even if she’s the only one who does.

When You’re My Shining Star, a talent competition focused on K-Pop, holds auditions in her area, Skye knows she has to try out. So, she skips school and shows up for what she hopes will be her chance to totally wow the judges. Unfortunately, while her performance is one of the best she’s ever given, some of the judges aren’t eager to take a chance on Skye. Suddenly, in front of tons of other would-be contestants as well as a camera crew, Skye is forced to defend not only her lifelong dream, but the right for anyone who isn’t extremely thin to create art.

What follows is not only a behind-the-scenes look into the making of a reality TV show, but a deep and often heart-wrenching look into one young woman’s journey toward self-acceptance. Skye is a remarkable heroine, more self-assured than I could have even dreamed of being at her age, smart, resourceful, and unwilling to back down. She knows what she wants, and even when things get rough, she plows ahead, sometimes making mistakes, but always seeking the best, most fulfilling way to be who she’s meant to be, and lest she seem too good to be true, let me assure you that she’s not always sure of her identity. She considers herself bisexual, but because of her contentious relationship with her mother, she’s afraid to come out to anyone but her closest friends, and yet, her unwillingness to come out makes her feel hypocritical at times.

As the competition heats up, Skye throws herself wholeheartedly into a grueling schedule of rehearsals and performances. Plus, she’s still in school and letting her grades fall is not an option. Needless to say, she’s busier than she’s ever been, but things aren’t all work and no play for her and her fellow contestants. Fast friendships are formed, and Skye even gets a shot at first love, even if that love comes from a direction she never anticipated.

If you’re sensitive to fat-phobic commentary, I’ll Be the One might prove difficult for you to read. Skye is bombarded with anti-fat rhetoric from her mother, from the judges, and from several of the other contestants, so proceed with caution if you decide to pick this book up.

Nothing I can say can adequately convey my love for I’ll Be the One. It’s the kind of book I would have loved to read as a teenager struggling to fit into a world that didn’t always feel welcoming. Lee has created the perfect combination of lighthearted fun and introspective wisdom, making this a great book for readers both young and old.