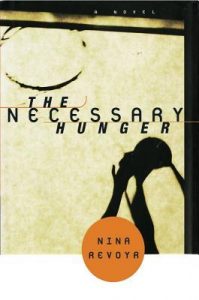 Published in 1997, The Necessary Hunger is one of those novels that should be on the required reading list for queer women: it so perfectly depicts its protagonist’s emotional journey, impeccably capturing the essence of adolescent passion, basketball, unrequited love, and this particular moment in time in 1980s Los Angeles.

The novel is told from Nancy’s point of view, as she looks back on her adolescence many years later: she tells the story of her coming of age in the mid-1980s as a Japanese-American star basketball player, as she navigates her feelings for Raina, an African-American star player from another school, who actually ends up as her step-sister of sorts when Nancy’s dad and Raina’s mom get together, and they all move in together.

This plot point that could take a turn for the comedic is instead conveyed beautifully and movingly: it adds such an achingly sharp edge to Nancy’s unreciprocated feelings for Raina, her longing for a person so near and yet so far from her. Raina herself is queer, and has a good-for-nothing girlfriend who she nevertheless can’t seem to quit – adding another torturous dimension to Nancy’s feelings (and putting the novel a cut above the tired “pining for a straight girl” trope). Through this specific, awkward, beautiful lens, Revoyr deftly portrays such ubiquitous teenage feelings: yearning, discomfort, infatuation, listlessness – the roller coaster of unrequited love.

Nancy, and the novel, are both so much more than just her love for Raina (though that love is certainly the source of her most intense emotions, and is the novel’s  main thread): while negotiating these feelings, she is simultaneously navigating classes, playing high school basketball as a star player on a highly-ranked team, and trying to figure out college plans, while parrying the impassioned advances of the college coaches who are courting her. The Necessary Hunger is infused with so much love that it’s contagious – the characters’ very emotions and passions become infectious, thanks to Revoyr’s skill at hitting all the right emotional notes through Nancy’s enticing and conversational first-person narrative. I know almost nothing about basketball, and don’t particularly care much for sports, but was riveted throughout the entire novel, basketball and all, because of Nancy’s passion and tone.

And Nancy’s love for her friends is just as appealing as her love for the game: her friends round out the novel as an engrossing and effervescent cast of characters, many of whom are queer themselves. Though the story is told from Nancy’s point of view, she sometimes gives brief, poignant insights into what the future holds for certain characters, since the entire novel is a look back on her adolescence from adulthood. This story is Nancy’s, but it also feels much wider than that – The Necessary Hungerarrestingly captures a specific place in time.

Through it all, there is the backdrop of the city of Los Angeles in the mid-1980s and its own particular social climate. Nancy’s experience as a Japanese-American girl (and then a member of a multiracial blended family) in a predominantly African-American neighborhood, her experience as a young queer woman of color, her experience navigating race and class with basketball teams from white, well-off school districts, her experience facing the privilege afforded by a basketball scholarship that is all but certain are all confronted head-on. The Necessary Hunger showcases Nancy’s life and identity, and those of her friends and family, in a way that feels straightforward and fully realized.

The Necessary Hunger is a queer classic. If you haven’t yet read it, I recommend going out and finding a copy as soon as you can: Nancy’s story and journey and heartache are simultaneously so specifically hers, and so beautifully universal.