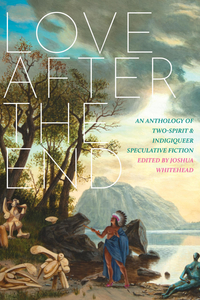 Love after the End: An Anthology of Two-Spirit & Indigiqueer Speculative Fiction edited by Joshua Whitehead is a collection of science fiction and fantasy short stories by Indigenous authors. It’s edited and introduced by Joshua Whitehead, the author of Jonny Appleseed and full-metal indigiqueer. In that introduction, Whitehead reflects on the intersection between Indigeneity and queerness: “How does queer Indigeneity upset or upend queerness? Are we queerer than queer?” He goes on to explain that originally, Love after the End was going to be a collection of dystopic stories, but they pivoted towards utopias: “For, as we know  we have already survived the apocalypse—this, right here, right now, is a dystopian present.”

The introduction alone is thought-provoking and sometimes intimidating. Whitehead brings his study of theory to this work, and some of the ideas went over my head. I appreciated being introduced to these ideas, though, and it definitely left me thinking, including his mention of “contemporary erasures and appropriations of the term Two-Spirit by settler queer cultures who idealize, mysticize, and romanticize our hi/stories in order to generate a queer genealogy for settler sexualities.” Besides, this is an anthology by and for Two-Spirit and queer Indigenous people; as a white settler reader, I know I’m not going to understand every reference. The authors are from many nations across North America, and many stories include untranslated words from different Indigenous languages.

Although the introduction is academic, the stories themselves are written accessibly. They cover a lot of different topics, but many come back to the idea of space travel, and especially of evacuating a dying Earth. In one story, a portal is made that allows travel to an almost identical, uninhabited planet. The main character has a white partner who doesn’t understand the main character’s reluctance to leave, or her distrust of the supposedly peaceful government’s settlement of a “new world.” The Earth is ravaged, and left for dead by most–Indigenous communities are some of the few people who are willing to stay. Another story has the characters’ escape hinge on space travel that will use the Earth’s kinetic core energy to fuel it, leaving the planet destroyed. Each character has to decide whether they will stay or go, and what that means for their identity and relationship with place.

As I was reading Love after the End, I was reminded just how colonialist SFF often is as a genre, whether it’s about “conquering new worlds” and literally establishing colonies, or centring Medieval England in fantasy stories, or just holding up white, straight, cis, male protagonists as the heroes. This collection is such a refreshing change of perspective. These stories include a relationship with the land that isn’t common in science fiction stories. They assume a greater responsibility for protecting the Earth than I’m used to from a dystopia. The question of whether to stay on a planet that’s been destroyed by (white, wealthy) human activity is very different here than in a typical white space travel story.

“How to Survive the Apocalypse for Native Girls” is about a “Native girl who loves other girls” writing a manual on how to survive in this post-apocalyptic landscape. It’s also an exploration of what systems would replace the white colonial system once it collapsed. She explains, “See, when the borders broke, people decided that Kinship should be our main law instead. Except the problem was that Kinship means different things to different people. And sometimes people who should see each other as kin, inawemaagan, reject each other.” She loves and respects her culture, but is also critiquing this new system of power: who is left out? She find that Two-Spirit people, including her friends, are not always respected the way they should be. She grapples with the idea of what it means to be kin, and who decides.

Many of these stories use Nation-specific language for identity, which doesn’t neatly map onto white, European categories:

“The boys made fun of Kokomis ’ shirt. They said I’m a girl and girls shouldn’t wear men’s clothes. They said I’m wrong.” Her mother crooned. She gently grasped her face. “When you were born, your Kokomis held you in his arms and he looked at me with tears running down his face because he had been waiting his whole life for another îhkwewak like him, and there you were, I gave birth to you, and I was never more grateful for anything else in my life. You are a gift, Winu. And people are often jealous of gifts that are not for them.”

Reading this collection also reminded me of what I’ve read about Indigenous survivance. Gerald Vizenor, the Anishinaabe scholar who coined the term, says: “Native survivance stories are renunciations of dominance, tragedy, and victimry.” I recommend reading more about it, including at survivance.org. The stories in Love after the End position Indigenous people in the future, instead of the past. They frame Indigenous nations as not only subsisting, but using traditional knowledge and culture as strengths in current and future societies.

… There’s also an m/m romance story between a teenage boy and an AI who is also a cyberengineered super-intelligent rat! (In this story, same-sex relationships are accepted, but human/AI romantic relationships were the “the sort of thing that was whispered about, something that lived in the shadows.”)

I really enjoyed this collection, both as an addition to queer lit and as a much-needed collection of SFF. This is a great way to be introduced to a lot of talented authors, some of whom also contributed to Love Beyond Body Space and Time and some who are new to this collection. Usually in an anthology, I concentrate on the sapphic stories, but because Two-Spirit and Indigiqueer identities don’t neatly fit into white western categories of sexuality, I’m not going to try to separate those out. I will say that I think this collection is definitely relevant to Lesbrary readers, and it left me hungry for more Two-Spirit and Indigiqueer SFF!