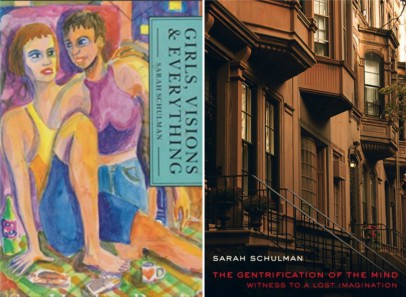 Over the summer I set myself the challenge of reading one Sarah Schulman book per month – my interest had been sparked because my queer platonic partner had written her dissertation on one of Schulman’s novels Girls, Visions & Everything and the dissertation was really great! I ended up reading 4, one each month of summer with a bonus one in july! The other three were After Delores, The Gentrification of the Mind and Empathy. Here are reviews of my two favourites, both of which I gave 5 stars to.

Like I said, girls, visions & everything was the first book I read, and I read it in about two days whilst I was on holiday, by a pool soaking up the heat. My setting perfectly mirrored the books sweaty summer time atmosphere. At that time it was the dyke-iest book I had read so far in 2018 (I think it’s now been slightly eclipsed by Sarah Waters’ book tipping the velvet). The story gives us a brief glimpse into dyke-about-town, Lila, who lives in new york city and is exploring and finding new relationships and making art. It’s unapologetically queer, sexy and sharply meaningful. The prose is really beautiful, like drinking water: simple and clear. As a character, Lila has stayed with me, and the lessons she learns in the text are relatable and sweet. The book includes some moments of harassment & discussions about sexual violence.

The other five star book I read of Schulman’s was not a novel, and in fact I think it was probably the best nonfiction book i’ve ever read! It was the 2012 book the gentrification of the mind: witness to a lost imagination. The book is about the ways that gentrification was affected and accelerated by the AIDS crisis both in terms of its physical & financial affect on life in New York City, but also in how it lead to a gentrification of the mind – of art and artist practice and community space too. it’s very tragic, but it honestly blew my mind as i read it, and it really made me consider and question my role in continuing gentrification(s) and inspired me to make active choices about the art I make and the spaces I encourage and support with my presence and my money. It is focused on the US and I live in the UK, but I still found it to be pertinent and interesting to my gay life. I definitely think if you’re an artist you should read this book!!

I’m excited to read more Sarah Schulman books, especially Rat Bohemia, and her first novel The Sophie Horowitz Story. If you would like to hear my thoughts on all four of the books I read I made a video about them here.