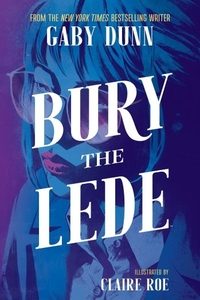 This is the third book I’ve read by Gaby Dunn, all back to back (to back). There are some similarities: I Hate Everyone But You and Please Send Help… also have a bisexual intern reporter whose moral compass may be a little bit off. But while the novels have an unshakable friendship at their core, which keep them feeling light, Bury the Lede sinks into noir territory, with a protagonist willing to follow a story wherever it goes, even if it means bringing down everyone around her.

This collection immediately sets the tone with dark, sometimes off-putting colours and shading. There will often be unnerving details like jam on a butter knife that looks like blood, or splatters in the background of pages. It’s not just the tone that’s noir: the content gets pretty gory, including depictions of a mother killing and dismembering her child. We see the same murder play out multiple times as different versions are proposed.

This mystery is what drives the story: Madison attempts to interrogate a suspect and had hardly begun before Dahlia gives her a gruesome account of her guilt. Madison keeps coming back to get more details, and although she doesn’t trust Dahlia or the possible wild goose chases she keeps sending her on, Madison becomes increasingly obsessed with her. The story spirals out, encompassing politics and other, seemingly unrelated crimes. Dunn doesn’t spoon feed the reader: at times I had to stop and reread panels a few times to keep up with the information being presented, and it definitely kept me guessing.

As for the queer content, Madison is a bisexual Asian-American woman, and her love interests include a queer butch black woman and a bisexual white cop. There are f/f sex scenes on the page–and I have to add that on a recent Buffering podcast, Dunn shared that she got to give her favourite note on this page: “No, the femme is the top.” I also appreciated that Madison is chubby. She’s clearly desirable, and she also has a belly. I can’t get enough of positive fat representation in comics.

I recognize that Madison is meant to be complex, and possibly even “unlikeable.” Usually, I love an “unlikeable” female character. This time, though, it was pushed far enough that I no longer wanted to root for her. [Spoilers] She roofies a woman to get information out of her, for one thing. [End spoilers] I’m sure that this is consistent from what we’d expect from a classic noir detective: pursuing the truth no matter who it hurts or what gets in the way. But while most times I can see where a flawed character is coming from, in this case it felt like she was willing to throw absolutely everyone she knows under the bus to get a byline.

Having said that, maybe I don’t need to be able to relate to this character to still find her story compelling. I was sucked into the story, and I am curious to see what happens next. Despite having no interest in male noir detectives, I keep being drawn to similar stories with female main characters. If you’re looking for a gritty graphic novel with a femme fatale, questionable ethics, and a bisexual chubby Asian main character, Bury the Lede should be at the top of your list.