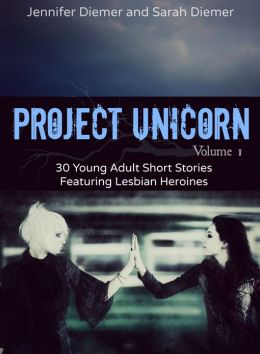 Project Unicorn: A Lesbian YA Extravaganza! by Jennifer Diemer and Sarah Diemer is a free fiction project that was created, in the authors’ words, “because of the obvious lack of lesbian heroines in the Young Adult genre, and the critical need for them.” Typically updated twice a week, this project provides short genre-fiction stories that feature lesbian characters.

I’m reviewing Project Unicorn: Volume I, which includes The Dark Woods, The Monstrous Sea, and Uncharted Sky. I really can’t tell you how delighted I am that these stories are being written and published – for free, no less – in the first place. I’ve always been a genre fiction girl at heart, and I’ve sharply felt the lack of lesbian characters in genres like fantasy, sci-fi, horror, and historical fiction. Not only is the quality of the stories in Project Unicorn: Volume I extremely high, there 30 stories to enjoy in this volume, more on the authors’ website (http://muserising.com), and more to come. The stories are extremely diverse, from mermaids to ghosts to werewolves to aliens. They span all sorts of time periods, and elements of romance appear in varying levels of focus. I loved the sweetness of the relationships in “Finding Mars” and “The Gargoyle Maker” as much as I appreciated that romance wasn’t forced to take the spotlight in “Melusine”. The characters are all lesbian, but their lesbianness doesn’t necessarily define who they are. There was a balance of stories in which being a lesbian was a non-issue and ones in which the characters had to deal with the discrimination and hardships that lesbians face in reality. I found the balance very satisfying, because I get tired of all stories featuring lesbians focusing mostly on their lesbianness, but at the same time I understand the importance of acknowledging what we go through.

Some of my favorites from the anthology include Jennifer Diemer’s “Dreaming Green,” about a woman on a sterile space station who finds a mysterious seed in space and defies regulations by planting it; her “The Girl on the Mountain”, which follows the relationship of a young girl in a mountain village with a sky-being who her people consider to be a deity; Sarah Diemer’s “The Gargoyle Maker,” about a woman who creates stone monsters to protect a medieval town; and her “Nike,” a stunningly beautiful story about a bullied girl who reaches the depths of despair and learns how to raise herself out of them. Also among my favorites are “Kyrie” and “Mirror,” two extra stories not published on the website that are included in Volume I.

The writing quality ranges from charming to exquisite. There were a handful of stories that left me wanting more and felt like snapshots of a larger story, but the majority of them were well-rounded. These are stories I’ll gladly curl up with and read again when I need comfort or crave escape.