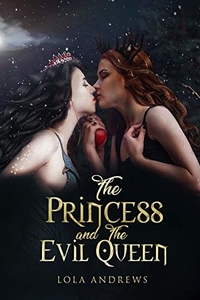 Princess Snow White and the Evil Queen (Harlow) have been at war for years. Harlow might have been married to Snow’s father, but he died shortly after they were married, and the two women are very similar in age. Growing up, they had something of a friendship, but that changed over time, and their paths diverged into darkness. Now, Harlow suggests a truce to the war that would require Snow to live with her and at the end of it make a choice that would change everything.

Harlow, on the other hand, is hardened, but understandably so. The story delves into her past: how she got her powers and to be the queen in the first place. She has many secrets that she struggles with, along with the trauma of her past. I like that the story doesn’t shy away from the darker parts of her or try to excuse her actions when they’re wrong. She has to make right what she’s done, not only for Snow, or her kingdom, but for herself.

The romance was a lot of fun and never felt like my excitement died down while reading this. It helps to know the fairy tale beforehand and come into it knowing that Snow and Harlow were at least somewhat close before the war, because things do pick up rather quickly. Having said that, I never felt like it moved too fast. I could definitely tell these two were old friends in some way, and the chemistry sparked so easily between them that their interactions felt natural.

The world building and the magic were also great. While the story changes the narrative, it still felt like a fairy tale, and without giving too much away, the way the magic mirror works was a really interesting twist.