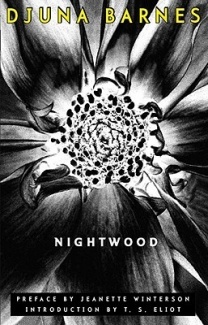 I have never been so confused as I was while reading Nightwood by Djuna Barnes. I felt exceedingly silly, like I was missing a trick (or several) about the impenetrable prose and the seemingly nonsensical character behaviour. I was expecting to be wowed, amazed, startlingly impressed by it as a work of literature. Jeanette Winterson promises, “Reading it is like drinking wine with a pearl dissolving in the glass. You have taken in more than you know, and it will go on doing its work. From now on, a part of you is pearl-lined.”

I am not pearl-lined. I do not feel enlightened or changed in any way, except for the dip in my self-esteem that this book brought about. But I survived it. I may still be wondering what the heck? But I survived.

Nightwood is a lesbian fiction classic from 1936, and is set in the 20s. It weaves in and out of the lives of a group of Europeans and Americans as they navigate love in a dazzling, slightly seedy underworld in Paris. For me, the focus of the book was a woman named Robin, who is first married by a Baron, with whom she has a child. She then leaves both husband and son to wander the globe, ending up in America. In New York, she meets a woman named Nora Flood, and begins an affair with her. Robin can’t seem to still her restlessness, however; even though she and Nora return to Paris, she eventually leaves Nora for a woman named Jenny. Nora reveals that this is not the first time that Robin has strayed from her, and that loving Robin causes her great pain due to Robin’s mercurial nature.

I’m a little astounded that I understood any of this at all. Most of the book is written in lengthy soliloquies, delivered mostly by the doctor Matthew O’Connor, who secretly dresses in women’s clothes and also acts as a general confidante to all parties involved. I found myself thinking that it would be more suited to performance than to a novel. The language is often poetic, and I could appreciate it from a stylistic standpoint, but I found it difficult to access the meaning a lot of the time.

That isn’t to say that I wasn’t interested. I did become invested in Robin and Nora’s relationship, which was messy and layered and confronting. I did feel that their love was infantilised at times – Robin is said to play with toys frequently, and also gifted Nora a doll which becomes emblematic of a child within their relationship. The complexity of their relationship and how it was portrayed was an enjoyable part of the book: it is largely what compelled me to keep reading. The second to last chapter, in which Dr Matthew visits a distraught Nora and they discuss her relationship with Robin, was engaging and heart-wrenching. The problem is, I could have done without much of the commentary from the doctor.

I have done some reading around responses to the book, trying to figure out what it is that I’m missing, and they often speak of the book’s humour – something I didn’t get any of at all. I think the mystique around this book – which has been called “one of the great books of the twentieth century” by William S. Burroughs – established my expectations. I was sure that I was going to find Nightwood incredibly profound and altering. I think it was this expectation that left me feeling so inadequate as I finished. I’m sure that I’m missing something, that I lack the language and the smarts to truly understand this book.

Maybe it’s not just me. As I took my initial complaints to Instagram, Danika consoled me by suggesting that its impenetrability was what allowed the lesbian content to fly under the radar. It did make me feel a little better: at least I understood that much. In the back of my edition, there is an extract from a letter by Frank Morely to Geoffrey Faber of Faber & Faber Publishers. In it, he remarks, “the point is that there is no reporting of lesbianism, no details; the conflict is one of souls, not bodies, and if for censors’ sake there have to be any individual words cut out; the work itself wouldn’t much suffer.” It’s almost comforting to know that a book with pretty obvious lesbianism had its champions through publication, enough that they were trying to figure out how to keep the book as intact as possible.

I think as well that there are certain expectations that queer people have for so-called queer classics. We want to see ourselves, to feel a connection to the ghosts of our identities past, to hold that tangible proof that we have always existed. As such, it seems doubly disappointing when a book doesn’t live up to that image which we create. It is also hard to deal with that the book is obviously of its time: there are fleeting moments of racism, and some glaring antisemitism, both of which make it impossible to empathise with any of the characters.

The root of my struggle with Nightwood is that it felt exclusionary. I am used to lesbian fiction which invites its readers to engage and enjoy, to understand and to feel seen. It is hard to feel any of that with a book that seems to set out to distance the reader from the content. What could have been an entertaining romp through Europe, a heartbreaking portrait of a love in crisis, a farce filled with offbeat and quirky characters, turned into something isolating and stressful for me. I can usually see why a classic is a classic, but in this case, I am feeling excluded from engaging with the literary canon. It will stay with me, like Jeanette Winterson promised, but not in the way she meant.