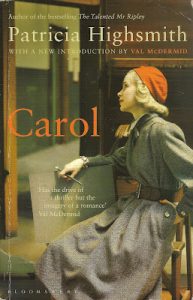 ”How would the world come to life? How would its salt come back?”

Finally read this classic! Carol, originally published as The Price of Salt by Patricia Highsmith in 1952, was written in the late 40s, taking some inspiration from Patricia Highsmith’s real life and running away with it.

The story is about Therese, a young woman who at first works in retail but is hoping to get jobs as a set designer. She’s currently dating Richard but she does not love him and he knows it. Therese grows a lot during the story and becomes less awkward, but first, she has a few existential crises. One day, during the Christmas rush, she helps Carol select a gift for her daughter, Rindy. Carol has grey eyes and poise and Therese is immediately taken with her. They meet again and begin a friendship that is obvious where it will lead, although there is some resistance.

This book is often described as the first lesbian story with a happy ending. I’m not sure whether the story could be said to be happy – because for sure there are scars – but Therese and Carol are true to themselves. It is also a realistic description of the time and feelings.

Since this book was made into a movie, many may know the story, so I will focus on themes and elements within the book.

One of the things that immediately struck me was all the descriptions of things that are seen. It made for visual and captivating prose. Highsmith also describes emotions vividly.

The character of Therese is introspective. As I mentioned, she has existential crisises. They are not about her sexuality mostly – she’s never been in love and she immediately makes a connection – they are about her work and the place she has in life. This is something that everyone can relate with. Although she starts of as really insecure, she doesn’t have a problem saying ‘no’ to things she doesn’t like! I could also relate to her because she pushed a lot of people out of her life when she needed a change – she knows when a goodbye is a goodbye.

How males interacted with her was also interesting. At first, Phil and Dannie (her boyfriend Richard’s friends) ignore her and it seems like she gets jobs because of her connection with Richard. However, she managed to become friendly with them and she also gets jobs based on her connections.

The character of Richard was also interesting. At first, although I didn’t like him, I pitied him. He and Terry also appeared to at least have a good friendship when they laughed, but as time went on, he become more bitter and more sexist, using the ‘but I’m a nice guy’ and ‘you’ll change’, he gaslighted her and threatening to expose Terry. These are pretty common tropes, but it was done well, and keeping in mind when it was written, I cannot help but feel that on many accounts, Highsmith was a pioneer and beyond her time.

Carol’s character I can imagine as being very poised and having a ‘resting bitch face’ that hid her emotions. She does care a lot but never begs too much and her voice and expressions are usually controlled. She is also very direct and is not afraid to criticize. Although there was hesitation at first and a few misunderstandings when problems escalated, these two know how to maturely communicate! One thing that I noticed, is that Carol seems to be depressed: ”Carol was happy only at moments” (page 168).

As with regards to gender, I believe that this book was really progressive. It humanized a lot and voiced a lot of probably unpopular opinions. One thing that bothered me a bit was the use of ‘men’ vs ‘girls’ rather than ‘women’, something which is still done today.

It also offers a complex view of sexuality. For example, at one point, sleeping with the same people is described as a habit. Carol also has loved Harge, the husband she’s getting a divorce from and also another female before Therese. And although Therese did not love Richard, she seems attracted to another man for a while. There are no explicit sex scenes, but there are allusions to a good night!

This book is a historical fiction, but it was written in the same time (so at the time, it was a contemporary read). This was really felt. It was, for example, really interesting to see how humans interacted with so little technology. People used to amuse each other, go out to eat, go for car drives and talk, and so on. We still do it, but it had a different vibe to it.

I would recommend to read this book especially at this time. The story starts before Christmas and although it’s not really a ‘Christmas/Holiday read’ because it goes beyond the holidays, there is still a holiday feeling with shopping, presents, and celebrations. This book is a classic because so many of the themes are applicable today, so many of the emotions felt we can nod to.

One question that I have after reading the book is…how many hotels did these two pay for and not stay in? I hope they managed to get a refund! Time to watch the movie now! I still haven’t…