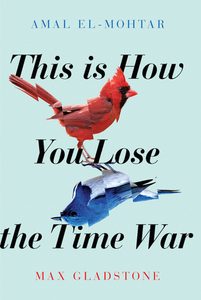 Time War reminded me a lot of Good Omens in the sense that two agents–on opposing sides of a high stakes global war that is being fought out across time (yes, time travel) and space and universes, while also only forming a backdrop to the lives of regular unwitting humans–are not as invested in the outcome of that war as they maybe are expected to be by the leaders of those forces. And then they meet, and find they are not indifferent to each other.

Red and Blue maintain communications throughout this story, and their communications are central to the development of both the plot and the characters. These communications are presented in letter form in the book, so it reads like a semi-epistolary novel (in case that is your thing, this is a good book to pick up, as every chapter ends with a letter). Even so, these letters are really steganographical messages (a term pulled directly from the dialogue, that I actually had to go and look up – good thing too, because it was then used again shortly after in another book I’m reading!), i.e. the message was concealed within another form. What shape that form actually took (hah) differed wildly, and includes a few notable instances, but I would prefer for the reader to be surprised by them as each new letter is received.

Both characters self-identify as female, but there is at the same time little indication that sex or gender is a defining factor within their society, especially as agents on both forces are capable of easily altering their own physical forms. Sexual orientation is never mentioned and appears to be pretty much a non-issue in this environment.

The relationship between the two characters grows with each letter they send and receive, and both the letters and the relationship they create, form, and reflect are at the heart of this story. Initially the dynamic between the two characters feels a bit like a microcosm of the war that is being fought out at a macro scale (as the characters themselves observe as well), but they quickly grow beyond and above that. They do not meet physically for most of the narrative, which creates a sense of their relationship structure feeling similar to any modern long distance relationship, where different time zones and few meetings can still be the basis of a strong bond.

The development of their relationship was extremely well written and completely believable. The questions about loyalty to each other versus loyalty to the force they serve were handled quite well, and become major plot points near the end of the tale. The end is also where the story flounders a bit. Without spoiling anything, there are a few time-travel related shenanigans going on and some of it–while presented as a major reveal–can be quite expected if you’re familiar with the time travel genre in general. In that sense the story doesn’t really break any new territory, even though it tries to present the plot twists as unexpected.