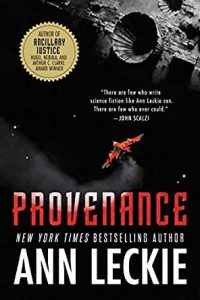 Ann Leckie’s Provenance centres on Ingray, the daughter of a prominent politician on her planet, as she attempts to put one over her brother by smuggling a notorious criminal out of an inescapable free-range prison. Unfortunately, she’s got the wrong person. What follows is murder, terrorism, several diplomatic incidents, and a mild alien invasion.

As you can probably expect from a story by Ann Leckie, the world-building is expansive and full of politics! Inter-family, inter-planetary, inter-empire (including some of the ripple effects from the Imperial Radch trilogy)… There is a lot going on, and watching Ingray navigate parts of it with ease and figure out how to navigate the more alien parts of it was delightful. The world-building of her planet specifically is fascinating – their culture is built around vestiges, items that were present in significant events of history or in someone’s life, and as you can guess from the title, their provenance and the meaning people impart to these objects is incredibly important. It’s a fascinating cultural note, as is the fact that everyone gets to choose their gender at adulthood, including choosing to not have a gender, and that’s just respected at a cultural level!

There are so many complicated relationships here, both politically and famillialy; Ingray and her brother have a very fractious relationship where they hate and envy and distrust each other, but they protect and cover for each other out of loyalty to the family, and it’s excellently written. It ties into their relationships with their mother, their respective family roles and skills, and the details of the plot. It’s fantastic. And the relationship she builds with her stolen criminal (who happens to be both non-binary and dry as the desert) delights me! As does Ingray, for that matter; she gets to be anxious and cry a lot, but still be the protagonist and good at her job whether that’s politics, managing the press, or protecting her family! Her entire world is turned upside down (only partially by her own hand), and seeing her response to it made me very happy. Especially the romances: there are two romances, and they’re very subtle and gentle, which is pretty much ideal for me.

The long and the short of it is that Provenance had me at the complicated siblings, and then it brought me a story about history, artifacts, and politics as well, of course I was going to love it.