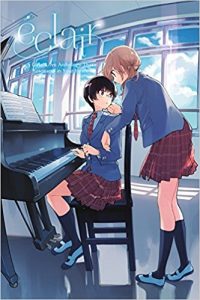 éclair is ostensibly an anthology of lesbian romance manga, collecting stories whose protagonists range from primary school children learning about trust to young adults trying to juggle relationships and work. It’s got a generally high quality of art. However. There are perhaps sixteen stories included in this volume, and there’s maybe two that I would count as a functional relationship, which is a bad ratio for something advertised as romance.

Here’s a quick overview of the stories:

1) “Happiness in the Shape of a Scar” by Nio Nakatera follows a girl who tries to befriend a solitary pianist, and grows increasingly frustrated and jealous of her focus on the piano – to the point of actively fantasising about her hands being broken because of the rejection. The relationship that grows out of it is kinda sweet, but the fact that it’s rooted so thoroughly in the protagonist’s guilt and the love interest’s pain means that I’m not sold on it.

2) “Tears in the Clean Room” by Shiori Nishio is about a school girl finding out that her best friend has a girlfriend, and becoming overwhelmingly jealous. And her jealousy manifests as homophobia, the belief that her love is “purer,” and relief that her feelings were “neatly cut off without ever becoming corrupted.” Yeah, no, this wasn’t for me; I don’t know about you, but I don’t expect an explicitly queer anthology to drop a story where the protagonist is actively homophobic the entire way through. [Caution warning: homophobia]

3) “Human Emotion” by Shuninta Amano finds the protagonist – a woman is so good at everything that people have described her as inhuman and bullied her – starting to work with a woman who struggles with almost everything and decides to keep her. Like, explicitly comparing her to a pet and setting her up to fail for the protagonist’s enjoyment levels of keeping her. This was one of the relationships that I was suspicious of because of how unhealthy it was, and the way the protagonist’s mental state actually seems to be deteriorating over the course of the story. [Caution warning: bullying]

4) “Intro” by Chihiro Harumi follows a girl who immediately gets a crush on her oblivious new tutor, who happens to not notice anything that isn’t history, and decides to make her notice. If you like teacher/student romances, this is probably fine? I liked the way that the protagonist started to wonder more about the history her tutor loves as the story goes on, but on the whole it wasn’t for me. [Caution warning: teacher/student relationship]

5) “The Unemployed Woman and the High School Girl” by Kanno has an unemployed woman who gets money by being a sugar baby tying to fend off the advances of a teenage girl from a wealthy family who has a crush on her. I maybe like this one for the fact that both of the characters have someone they can be entirely honest around, and the woman is clearly trying to be a decent person despite all of her worst instincts, but I think that I like it solely because I’m not reading it as a romance, so take that under advisement. [Caution warning: adult/teen relationship]

6) “The Hairdresser” by Uta Isuki is about a girl who loves styling hair as she finally gets a chance to work on the model of her dreams: one of her classmates with long, silky hair. I think this one is quite sweet and silly, and does read as a sweet beginning to a relationship! The art is funny, and I enjoy Chika’s enthusiasm and her poses, even if I disagree with her hairstyle choices. It’s not bad!

7) “Alice in the Miniature Garden” by Sakuya Amano follows a maid responsible for tutoring an unwanted illegitimate child, and I have mixed feelings about it. When it’s being sweet about two unwanted girls choosing each other over and over again, I like it! But to get to those bits, you have to get through them both being needlessly cruel to each other, and I’m not sure I can be bothered with it.

8) “Master for 1/365” by Mekimeki has one of the few functional relationships in this book! The protagonist’s best friend volunteers to be her servant for a day and do anything she asks to make up for forgetting her birthday. It’s actually pretty cute and simple, which I appreciated after some of the other stories in this collection.

9) “Two Years and Eleven Months” by Kabocha is a melancholy story about childhood friends making a last ditch attempt to stay together after they start growing apart. It’s a quiet story with a bittersweet ending and both girls disappointing each other throughout, but it’s pretty well-told and I enjoyed how clear it was that the two of them still cared for each other even though it was hard.

10) “Game Over” by Kagekichi Tadano is about two school girls searching for a bed at the end of the world, and it manages to be equal parts atmospheric and silly. I like the way the reveal was handled, and I enjoyed how much the two girls seemed to like each other. [Caution warning: jokes about suicide]

11) “My Cute Bitch” by Izumi Kawanami was possibly one of the most frustrating stories in éclair. The protagonist moves in with a friend who likes casual sex with men, who then decides that maybe she’d like to date the protagonist! But as the love interest has no female friends, the protagonist decides that they can’t sleep together because a platonic friendship would mean a lot more. I… Have no idea why that’s in a girl’s love anthology when it seems extremely counter to that premise, but go off I guess! [Caution warning: cheating, slut-shaming]

12) “A Tale of Weeds” by Kazuno Yuikawa is the story about primary school kids I mentioned; a girl who adores her best friend starts to realise that maybe her best friend isn’t actually the nicest person when the friend starts bullying a new girl in class. It’s cute! It has characters learning about trust and friendship! I don’t necessarily understand why it’s in a romance anthology, but it is cute. [Caution warning: bullying]

13) “The Two of Us and Apples” by Taki Kitao is another sweet and goofy story; the protagonist has a crush on her best friend, who keeps asking for help learning to cook for men! The art is cute and squishy, giving everything a comedic tone that I think went well with the story and helped to show the protagonist’s frustration and fondness clearly! I think this might have been one of my favourite stories in the collection.

14) “Belle the Rabbit and the Wolf” by Hachi Itou is the only fantasy story in éclair, which makes it feel out of place. It’s a cute story about a bunny girl who owns a café helping a wolf-girl track down a delicious food that she can’t remember, and the art is lovely? The story is fine, there’s not a lot of drama? But tonally it’s very different from the other stories so I’m not sure how well it fits in.

15) “Your Jinx” by Fumiko Takada is so ridiculous that I’m honestly tempted to skip over it. A schoolgirl approaches her crush (who she has never even spoken to), to announce that she’s pregnant with the crush’s baby. I would like to stress the fact that they never even spoke before this! It’s ridiculous, the punchline is kinda gross, and if you do get a copy of éclair I’d suggest just skipping over this.

16) “My Idol” by Auri Hirao is another frustrating one. Two idols use on-stage fan service as an excuse for physical contact, which obviously ends in tears. I didn’t like this one, mainly because I didn’t see the point of it, especially not in an anthology that’s supposed to be about love?

I think the problem might be in the way that I interpreted the marketing. It’s advertised as a girl’s love anthology, which I took to mean it would be an anthology of romances, with the attendant happy endings and relationships that go with it. What I got was an anthology that didn’t seem to have a unifying theme or tone beyond having two female leads, some of which have a romance/romantic feelings and several of which don’t. This isn’t necessarily a problem, because sometimes you do need stories about unhealthy disfunctional relationships, and sometimes you do need stories about friendships between queer women! But in a manga advertised as a girl’s love anthology, I expected the stories to be similar in tone or structure or level of romance, anything, and they’re not, so I came away feeling quite disappointed.