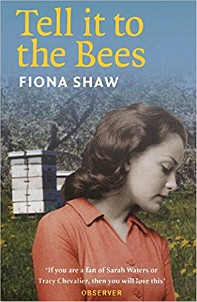 During a classic late-night spiral down an internet hole, I happened upon the trailer for the not-yet-released movie based on this book. The trailer appeared to follow the same depressing arc we accept in film as As Good As It Gets For Us, but the book was available at my local library, and the carefully-skimmed-to-avoid-spoilers review I glimpsed on Goodreads promised me a happy ending. I was still wary, but the book was a short one, and let’s be honest: a whisper of queer representation and we all start running headfirst into walls. So I picked it up and went in with the lowest of expectations – mostly just hoping I could get through it without putting it down too many times.

I have pretty specific needs when it comes to period pieces; while I certainly have exceptions, generally speaking, I don’t go out of my way to read period sagas of war or famine or heartache. I want Jane Austen. I want some bumps and misunderstandings that end in the bad guys getting what they deserve, and the good guys coming out on top.

Suffice to say, queer period pieces are usually very much not my thing.

I’ll read them/watch them for the three seconds of pleasant content – because I’m gay and I can’t help myself – but I’m always mad from the get-go because we know how these things tend to play out.

Tell It to the Bees took me wholly by surprise. Shaw is not in a hurry to tell her story, and while I’m not always in the mood to have the plot move along so slowly, the book as a whole is such a quick read, I was okay with sitting back and letting her paint her picture in her own time. Much of this book was read in the company of my girlfriend – currently a nurse, but a Zoology Major in another life – and I constantly interrupted her down-time to fact check bits of information about bees and hive mentalities as I read. There were so many interesting threads to this book, and they were woven together delicately and deliberately. This was my first introduction to Fiona Shaw, and I am now very curious to see what else she has to offer.

Jean is the town doctor. Single. A pretty big deal, for 1950s Scotland. She’s rational and a little distant, and she spends most of what little free time she has between her best friend Jim, and her bees. A fight on the schoolyard brings Charlie Weekes into her clinic; Charlie is quiet and precocious, and drawn to a honeycomb Jean keeps in her office. The two of them bond over her bees in their reserved, introverted fashions.

Charlie’s father leaves him and his mother for another woman, and Charlie – bearing his mother’s sadness on top of his own – withdraws further into himself and the world of the bees. Jean eventually invites Lydia and Charlie to dinner; from there, Jean and Lydia form a tentative connection of their own through Jean’s library.

Already, we’ve touched on a good number of my favourite tropes. We have:

In the usual fashion, Jean has a male best friend. Jean and Jim grew up together. Jim proposed to her when they were young and was subsequently turned down. Because reasons. Jim marries a pleasant enough woman named Sarah, and (again, in the usual fashion), there is an underlying note of competition between these two women over who best knows the man keeping the two of them together. There are so many pure moments in this book, but the note that struck me occurs just after Jean accidentally outs herself and Lydia during a dinner party. Jean panics and leaves the room. Sarah goes after her. I – the anxious reader – pull my blanket higher in anticipation of the impending dramatic moment when Sarah gets confrontational and threatens to out her to the entire town.

Only, it doesn’t happen.

Instead, in a display of human decency that should be so basic but isn’t (and thus, still took me out at the knees), Sarah accepts it all in a moment and moves straight to comforting this woman who is really only her friend because of her husband.

Men hear things differently from women, Jean. Even Jim, who’s better than most, and knows you as well as anyone. I don’t think he heard you. At least, not as I did… I don’t really understand. But I don’t think your love is wrong, and I’ll defend you against all comers.

It was more than a queer story. There was something so delightfully normal about it that I wanted to stay in the pages forever. I’m glad that we have so many deep, hard-hitting books to choose from, but every once in a while, I just want a queer version of that Jane Austen read. I want to know that there may be some bumps and misunderstandings, but at the end of the day, the bad guys are going to get what they deserve and the good guys are going to come out on top.

Despite what Goodreads tried to tell me, I was stressed to the max while reading this book. Some characters were lovely, and others were so horrid that I was certain either Jean or Lydia had to die/move away/marry a man and pretend the affair never happened. There were tense plot points. There were moments that struck close to home and really captured the rage that can occasionally take you by surprise when you are a queer person living in a hetero world, and can’t do things like hold your partner’s hand in public without it being A Thing. But the queers live happily ever after, and I will be buying my own copy of this book.