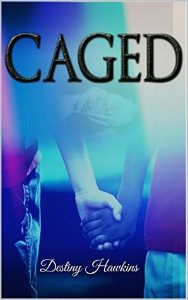 At the beginning of the story, main character Rose is eight years old and recently abducted. Our antagonist Arnold runs a child fighting ring, and Rose makes him money.

The details involving the collapse of the fighting racket, the rescue of the (many) kidnapped children, and Arnold’s arrest are all very vague, but the majority of the novel takes place many years later. Rose (now a high school senior) has recently moved to Ohio following an ‘incident’ at her old school in California. The novel is written entirely from Rose’s first person POV, and in the initial chapters her narration is a little world-wise for an eight-year-old, but it’s spot on for the part of the brooding teenager.

Rose attempts to forge a new life for herself; from her very first day, she’s drawn to Abigale and Lorena. Abigale is an easy-going girl who falls into a natural rhythm with Rose, and Lorena is the instant crush who leaves Rose tongue-tied. Abigale’s friend Cameron is on the wrestling team; when Rose expresses an interest in joining, the wrestling coach forces her to have a private pre-tryout tryout match against Cameron… because there is concern for her safety. Because wrestling is dangerous (for ladies), of course.

The idea is insulting, but Cameron doesn’t stoop to defensive posturing when he loses.  He’s quick to give Rose the credit she deserves for a good fight, and they become fast friends. Life is good for a short time, but Rose soon finds herself spiraling as she tries to move forward without ever really dealing with everything that has happened in her past.

There is a lot to this book that doesn’t make sense: Rose’s parents are killed prior to her rescue, and so she is placed in the care of her aunt. We learn through Rose that Aunt Shannon physically and mentally abused her for years, but Ohio!Shannon has sudden regrets and is committed to being an attentive guardian.

Arnold never actually goes to jail because ‘someone went in his place,’ and no further explanation is given. (Note that this is not a matter of having another human convicted in Arnold’s place; Arnold is sent to jail, and through some wild series of events to which the reader is not privy, it goes unnoticed that he is not in fact the one who arrives at the jail to serve the sentence.)

The California ‘incident’ at the old high school involved Rose accidentally killing someone, but the act is pardoned because of her special circumstances.

The plot is rushed along through coincidence and half the student body is tied to the fighting ring in some obscure manner by the end. But there is beauty to be found in the racial diversity. Rose is black, Lorena is mixed, and many of the characters are pretty pointedly not white.

There is a humorous moment early on in which Rose tries to figure out Lorena’s background; being mixed myself, I have been on the receiving end of the “what are you” question from so many white people, I am entirely unfazed by it. But Rose’s manner of venturing a few reasonable guesses caused a familiar tug of appreciation for People of Colour and their ability to ask the same question in a way that comes across as curious and not rude as fuck.

“Are you Guyanese?” “Which one of your parents is Indian?”

These are assuming questions, but at least there’s a degree of recognition; it doesn’t sound like you’re asking someone about their rescue dog.

Rose knows her strengths, and she is unapologetically confident.

The queer content is light, but there is bi and lesbian representation.

One of the wrestling team bros is dating Lorena in the earlier chapters, and he regularly abuses her. Because of a ‘lack of proof’, Cameron very problematically extends the benefit of a doubt to Abusive Wrestling Douchebag.

Aunt Shannon makes a dismissive comment regarding her relief that Rose is ‘at least interested in somebody’ after she begins spending more time with Lorena.

Rose dresses Lorena up ‘like a tomboy’ after a sleepover to ensure that Cameron won’t hit on her.

The plot is not particularly well executed, but it shows immense imagination.