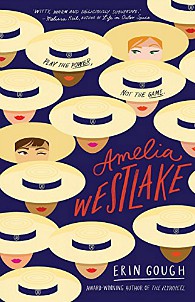 [warning: this review references sexual harassment, bullying and victim blaming as depicted in the novel]

If you’ve ever wanted to read an intersectional feminist lesbian love story about teenage girls pulling off a political art hoax, then this is the book for you. In all seriousness, this is a brilliantly written novel about two very flawed, very likeable young women who don’t yet know all that much about themselves or each other until they cross paths at a pivotal time and end up starting a social movement in their repressed private girls’ school. Will is an artsy, middle-class, highly-politicised loner who despises being at Rosemead Grammar, while Harriet is a rich, high-achieving, athletic do-gooder who is disappointed that the school she adores so much is letting certain issues slip through the cracks. Somehow they find each other in the mess that is high school, realise they’re the perfect team and create an alter ego (Amelia Westlake) through which they can express their critique of various toxic cultures at Rosemead.

Despite their compatibility as artists and social commentators, Will and Harriet butt heads on basically everything and can’t seem to figure out why they’re so obsessed with each other. Certain friends and family act throughout as foils to Harriet and Will’s self-deceptions about each other and their own self-images and the book doesn’t hesitate to point out hypocrisies, privileges and moral corruption inherent in every area of both girls’ lives, including in well-meaning projects like Amelia Westlake. Both lead characters begin to talk frequently to themselves and others about ideas around ethics and politics, and Harriet and Will’s bond feels genuinely deepened and complicated by getting to know each other and themselves on this journey. It is relieving that neither Harriet nor Will are under any illusions about their sexuality, though, and both have been comfortably out since well before the novel’s events take place. This saves extra room in the book that might have been spent on a coming out narrative to instead be devoted to humorous arguments and unambiguous sexual tension. Additionally Will’s inner monologues as she begins to realise her feelings for Harriet are solid gold and relatable for any stubborn young woman who surprised herself by realising she’s falling in love.

Amelia Westlake largely deals quite well with sensitive issues like bullying, racism, classism, homophobia, and white privilege, and for the most part does the same with sexual harassment. However, there is a series of scenes where one character encourages another to come forward with a complaint as a way to help others. In these interactions it is implied by the other person that the victim being spoken to has a responsibility and shares culpability if another person is harassed because she has not spoken up. This verges dangerously on victim blaming. It is not clear if the author believes this is the appropriate attitude to take when advising victims. Regardless it is a concerning depiction and one to be aware of when choosing whether to read this book. Additionally though there are prominent non-white characters in the book, the cast is still almost entirely white, cisgender and abled while the text is mostly about privilege, power and politics. These are not necessarily incompatible elements but it would have been good to see more representation of marginalised peoples in a book so deeply concerned with empowerment and justice.