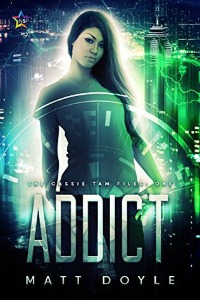 Popular lesbian author Lori L. Lake has an interesting essay on pseudonyms and the reasons writers choose to use them. Oddly, she fails to discuss the use of pen names in lesbian mysteries. The omission is even more unusual because “Lori L. Lake” is, in fact, itself the pseudonym of a writer of lesbian mysteries. I don’t know her reason for using a pseudonym, but a number of other lesbian writers are simply afraid to be outed as lesbians, either at work or with their families. Nikki Baker is one of these, as is current superstar Lee Winter.

Then there are other writers—like Lake—who use pseudonyms for reasons unknown: Kate Allen, Radclyffe, Jae, Rose Beecham, Ellen Hart, and on and on. I’m sure that most of these women have good reasons for using false names to write under. But think of how different the reasons must be for a man.

As far as I know, Matt Doyle, who wrote Addict, is the author’s real name. But if that is true, it puts him in a very small category. My research shows that only a few male writers of lesbian mysteries use their real names—not including initials: Charles Atkins (a prolific author with many other books), David Galloway (a supposed literary writer), Mark McNease (whose lesbian sleuth is a spinoff from his popular gay detective series), Samuel L. Steward (whose two books about Gertrude Stein and Alice B. Toklas are as much literary reminiscences as they are mysteries), and Jason Halstead (another prolific author with many titles).

J.T. Langdon and R.E. Conary are also men, but as far as I know, they use their real initials and their real last names. N.H. Avenue also uses initials, but his last name is also not his real one. A pertinent question is this: how many male writers of lesbian mysteries use female pseudonyms, and why? The answer to the first is ‘I don’t know,” and I may never know. But the answer to the second is obvious. Anyone who has read more than a handful of reviews knows 1. that most readers of lesbian mysteries are not only women, but also lesbians and 2. that many—not all and maybe not even most—lesbians want to read books by lesbians about lesbians. Period. They would pass up a lesbian mystery written by a man without even reading the blurb. Truth, folks.

I happen to believe that a good writer can write about either sex. Henry James wrote Daisy Miller, The Princess Cassamassima, and What Maisie Knew.Thomas Hardy wrote Tess of the Durbervilles, George Eliot wrote Silas Marner. I’m sure I don’t have to go any further because the list is endless. There is no reason why a man can’t write good lesbian fiction, but if they want to be rated based on the fiction rather than their gender, it’s probably pays to write under a female pseudonym.

Okay, let’s get to the review. Would my opinion of Addict be different if it were written by someone named Martha Doyle? Probably not, but the faults of the book are more with the story than with the characters. Like Jason Halstead’s Kat Wimple series, Addict is set in the future. Unlike Halstead’s books though, Addict doesn’t really feel like its set in the future. For one thing, his protagonist, Cassie Tam, doesn’t really like modern conveniences; she likes real blinds, for instance and normal furniture. You’ll find very little Blade Runner futureism here. The few futuristic things he mentions, like tech shifting and online addiction, are light on description. Cassie’s “protector,” a robot gargoyle named Bert, night must as well be a man or, as I have seen elsewhere, “a man substitute” whose job is to rescue Cassie. Even the modern city of New Hopeland—which I assume is meant to be something like the new city Elon Musk has envisioned creating—is given short shrift in its description. If something takes place in the future, we are going to need a lot more creation and a lot more description.

The mystery is quite a good one in theory, but on paper it seems overly—and unsatisfactorily—explicated. In other words, it’s hard to figure out what’s actually going on, even if we are told over and over. It’s the old showing instead of telling bugaboo. The author’s explanation of the mystery takes longer to tell than the denouement, and even that is dependent on our old friend, the seemingly normal person who is actually a criminally insane religious fanatic. In addition, the reasoning and execution of the crime is so convoluted that all you can do it blink and turn the page.

And I guess Cassie is a lesbian; she says she is and at the very end of the book she may even think about asking someone out. But again, she is a permutation of another of our old friends, a lesbian on the run from a bad relationship and terrified of being hurt a second time—although in this case, her old relationship is described as a good one and as far as I can tell without rereading, she wasn’t dumped by her ex. Oh well. In any case, the author is content with Cassie not having a real relationship. It is easier that way. Yet again, for lesbian readers this choice is far from satisfactory.

So regardless of the gender of the author, Addict is not something I can recommend. At less than 56,000 words, it is about 20,000 words too short. And those words could have been used to very good advantage to spruce up—and possibly eliminate—the problems.

Note: I received a review copy of this book that was kindly provided by the author in e-book form through Lesbrary.

For over 250 other Lesbian Mystery reviews by Megan Casey, see her website athttp://sites.google.com/site/theartofthelesbianmysterynovel/  or join her Goodreads Lesbian Mystery group at http://www.goodreads.com/group/show/116660-lesbian-mysteries