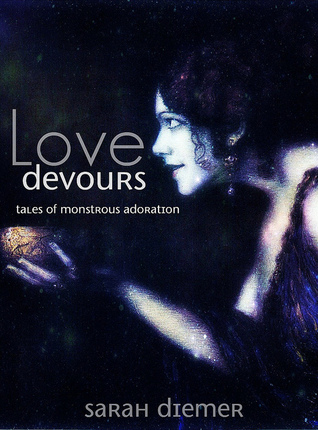 I really wanted to like Love Devours: Tales of Monstrous Adoration, a short collection of short stories with a dark fantasy/sci-fi theme by Sarah Diemer. That isn’t to say that the collection is wholly without merit, but some combination of the stories themselves and how they were organized seemed determined to hit me somewhere around “pretty good, I guess?” despite lots of pretty words and pretty girls kissing.

I don’t read a lot of sci-fi/fantasy in my free time, but I’m not averse to the genre when writing is strong, world-building is interesting, and characters are fleshed out. At 192 pages with six stories, Diemer frankly doesn’t have a lot of room to do all of these. Love Devours tends to feel more like a thesis than a story collection – the constant repetition of the monster in literal and allegorical form, the similar story framework, and the study of worlds (with the exception of “We Grow Accustomed to the Dark”) where lesbianism is celebrated and accepted without question or sideways glance. In theory, this works. It is refreshing to read a collection of stories without awkward coming-outs, without the danger of being cast out, bullied, or worse because of a word, an identity. Six stories featuring alternate, female-centered mythologies? Yes! Sign me up!

Unfortunately, in practice this collection was far from what it set out to be.

The stories range from actually quite good with the exception of a few details (“The Witch Sea”; “Our Lady of Wolves”) to poorly edited and poorly planned (“Far”, which opens the collection and sets the tone for huge aspirations with little delivery; “We Grow Accustomed to the Dark”). Diemer’s world building is, for the most part, interesting but rushed. Some basic details are in place, but I got the feeling that each setting is far more intricate in Diemer’s head than she communicates on the page. Characterization is lacking across the board – “We Grow Accustomed to the Dark” is the first and only story in the collection to actually use the first person narration to give the character a unique voice. And worst of all (at least for me) is the almost de facto lesbianism. I have little to no idea what brings these characters together, what draws them close, what urges them to kiss or to go on these epic quests. If Love Devours is intended to be a set of replacement myths, similar in blank form and grand adventure to the stories adopted from ancient civilizations into the Western canon I might be able to excuse the places where the collection fails. But style, narration, and story choices lead me to believe that Love Devours is simply failed in its execution, a rushed effort that doesn’t do justice to the ideas it wants to express.