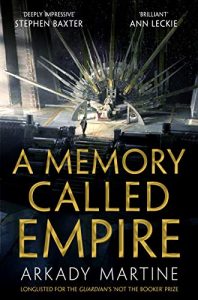 I picked up A Memory Called Empire as part of my ongoing fling with space opera as a great antidote to quarantine. There’s something about complicated plots, action, and space, that is really great for pulling me out of my apartment and into a nice brain space right now. This was a lovely book, full of meticulous, engaging world-building, fascinating plot developments, and a really interesting look at identity. If you are at all looking for some space opera right now, add it to your list.

Mahit is the new ambassador from Lsel Station on her way to the Teixcalaanli Empire to replace a long-term ambassador who has been killed. But she is facing more problems than just figuring out a cause of death. Tiny, self-contained Lsel Station has survived by making sure skills and experience survive and are passed down via neurological devices called imago machines. Once successfully integrated with a compatible successor, the imago machines mean that the full years and experience of previous imago owners of that line are passed down and integrated into the host’s own personality. But the previous ambassador Yskander has, somewhat suspiciously, been avoiding coming back to the Station to update his imago file, and so the imago that Mahit has been fitted with is almost 15 years out of date. It then goes on the fritz almost immediately after she steps foot in the Empire. Which leaves Mahit woefully unprepared for the situation she is stepping into, Lsel Station diplomatic training relying largely on imago memory. And so, almost blind and with only the help of her liaison Three Seagrass, Mahit has to navigate a new culture, the politics around an uncertain line of succession, the Empire’s interest in imago machines, and the feeling that something even more dangerous than the upheaval happening in the City is coming.

What I really loved about this book was the slow, inexorable build of pressure. As Mahit slowly figures out what is going on, so does the reader. Mahit feels extremely disconnected from events and from her position, because of the malfunction of her imago machine. Its absence strips her of whatever pre-knowledge she might have been able to access about the political situation on Teixcalaanli, and her disconnect is the reader’s disconnect. It was delightful, peeling back all the plot layers. Who killed Yskander becomes what was Yskander up to before he died. The heating up of the Emperor’s successor becomes intimately involved with her own small station becomes a looming threat greater the politics of one city. And through it all is a delightful exploration of what constitutes a person’s self and how the imago machines affect them.

Also delightful is that this kind of sweeping political space opera turned out to be queer. Mahit’s continual struggles with identity and who she is with and without her imago machine already have a strong queer element in them, but her snarky, flirty relationship with her liaison Three Seagrass is refreshing. When it becomes more than just off the cuff flirting, I gasped in delight. This isn’t a queer romance for the ages or anything, but it adds another great layer to this wonderfully layered book. And if you’re looking for space opera in general, knowing one is queer is a great reason to steer towards it.

In conclusion, I started this book looking for some standard space opera and was inexorably drawn into amazing worldbuilding, an intricate plot that kept me guessing, and a queer relationship that I did not expect but embraced whole-heartedly.