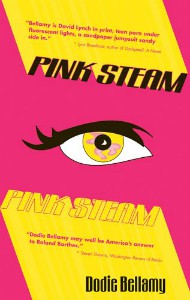 Pink Steam by Dodie Bellamy is a cross-genre collection of prose written over two decades. Contradictorily classified as fiction/essay/memoir, the 22 pieces are arranged into what the author has described as “a fractured autobiography in which the culture I live in is as much my autobiography as are the ‘facts’ of my life.” For her, there is no self separate from culture.

Indeed, throughout much of the book, the only sure “facts” I knew came as I sorted through the scattered debris of pop culture tidbits. (Yes! Carrie did wreak havoc at the prom with her telekinesis. No! Rosemary did not birth a son too pure for the devil to possess.) As for the arcane autobiographical details, no matter how many notes I scribbled in the margins, full understanding was tantalizingly juuuust out of reach. (Why did the protagonist suddenly begin calling herself Carla? It’s because of the demon fucking, right? Or is it the memory of the abortion? Are you taunting me on purpose, Bellamy?)

Ordered semi-chronologically, the essays begin in the early ’60s. Young Dodie is in a furtive relationship with Nance, her best friend who lives down the street. Writes Bellamy, “In the industrial Midwest of my youth, strong lines were drawn between inside/outside, normal/abnormal, natural/freak – and those lines were brutally enforced. In high school I was a lesbian, i.e., on the wrong side of all those slashes.”

Things do not stay this way for long. To placate her mother, with the summer of ’74 comes Dodie’s decision to be straight — a self-declared categorization that seems to hold for the book’s remaining essays. At the same time, she is never hesitant to describe her unfulfilled longing for women, in a manner reminiscent of Quasimodo’s longing for Gina Lollobrigida in the 1956 The Hunchback of Notre Dame (a theme tenuously threaded throughout the book). So, who knows. Who cares? There’s a little somethin’ somethin’ for everyone in this book; let’s just leave it at that.

Bellamy’s prose is a gorgeous, sometimes nonsensical tidal wave of words. The text is flooded with grocery lists and song lyrics and imagined film scripts and fantasy and horror and science fiction and poetry all at once, mid-narrative. Though I usually shy away from experimental bullshit, as a reader, I was swept away by book’s fabulously imaginative approaches, drawn in by its shifting undulations of tense and perspective.

Basically, this book is awesome.

In “Sex/Body/Writing”, Bellamy writes: “I’m working toward a writing that subverts sexual bragging, a writing that champions the vulnerable, the fractured, the disenfranchised, the sexually fucked-up.” As far as I’m concerned? She’s there. She’s got it. She’s flaunting it. And I absolutely love it.

Pink Steam seems to be out of print, but if you do a little hunting around you should be able to find it. Enjoy.