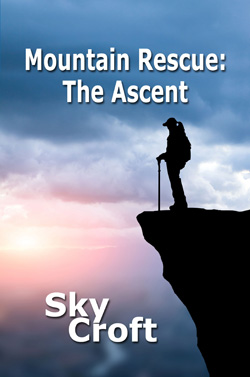 Kelly Saber is an expert climber and part of the Mountain Rescue team for her Scottish Highlands home, and the village she lives in is a place where everyone knows everyone, along with their business. When she meets doctor Sydney Greenwood after a rescue, they both quickly realize that the mountains are not the most exciting or precarious climb they will face. Sydney, an expert climber herself, quickly becomes friends with Saber and the rest of her team, a group as tight as many families. As attraction heightens between the two, they eventually move in and let their relationship grow. Yet Saber has a tough past, and even once she reveals the pain behind her, will she be able to let go of her own conclusions about life to believe that she and Sydney can weather any storm?

I found myself going back and forth with this book. I think that the main characters of Saber and Sydney were easy to invest in. I wanted to see them succeed, I felt the pain as Saber discussed her past with her parents, and the mountain climbing scenes were exhilarating and detailed. I did have minor issues with setting, but I chalk that up to my own ignorance about the Scottish highlands of present day (I read too many romance novels!), as it seemed more of an Americanized setting than one in Britain. Neither the dialogue or the village settings transported me overseas.

The other, larger, issue I had was with the pacing. I was glad to see a growing relationship between the two women, and while after several months they moved in together, that still didn’t throw me out of the story. It did move slow, however, with various scenes of dialogue that did not really center around Saber and Sydney, but circled around the men in their group: Doug, Jeff, Rich, Stuart and Coop. I found that some of the scenes, especially dealing with Rich and his obvious immaturity, not only dealing with the women but with life in general. He wavered between being earnest and obnoxious through much of the book. I enjoy supporting characters, but it drew out the pacing of the storyline enough that I wanted to skip pages to where “it got good”.

All in all, I think this book has many positive notes and excellent action scenes for the climbing rescues. If readers want a love story that builds slowly, that has some obvious tropes, but gives an uplifting story about rebounding from heartbreaks of many kinds, then Mountain Rescue: The Ascent, is a good choice.

One Reply to “Kristi reviews Mountain Rescue: The Ascent by Sky Croft”