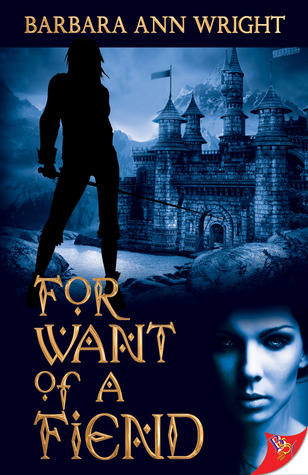 For Want of a Fiend / Barbara Ann Wright
Bold Strokes Books, May 2013. ebook.

Princess Katya Nar Umbriel’s uncle Roland rose from the grave, kidnapped her cousin, and stripped her of her greatest weapon—her Fiendish power. Without her Fiend, Katya doubts her ability to weather the storm her uncle is brewing. When she lacks what even the children in her family possess, can she even call herself an Umbriel?

In only a short time, Starbride has become the princess consort, a pyradisté, and a member of a secret order in charge of protecting the crown. Even steeped in responsibility, she’s still an outsider. While wading through court intrigue and resisting schemes to break her bond with Katya, Starbride must prepare for a covert war. Roland is waiting, watching, ready for any chink in their armor, and he doesn’t care who knows their secrets.

Long time no see, Lesbrary readers! I know, I’m only supposed to post once a month—how hard could it be? Thing is, it’s been a tricky couple of months—a new job, nicely combined with lots of surgery, where I let the nice orthopaedic men break my feet to make them better. The combination of exhaustion and pain killers has made it a bit hard to concentrate on stories in any form, be they audio or text. I did, however, know which book I wanted to read for you lot. It waited for me, taunting cheerfully through a haze of oxycontin:

Kztya and Starbride. You get to read MORE ABOUT KATYA AND STARBRIDE. WITH EXTRA PENNYNAIL. And if that isn’t an incentive to try and work through some pain, I don’t know what is.

For Want of a Fiend begins where The Pyramid Waltz left off: Katya battered and baffled, and Starbride still raw from the new power and responsibility that comes with being Princess Consort. Star is also living with the fact that, in order to save her beloved’s life, she had to take something away that, while it wasn’t exactly precious (seriously. Living with a fiend does not seem like a barrel of laughs) was still a crucial part of how Katya saw and thought of herself. Meanwhile, Uncle Roland is on the loose, Maia with him; Crowe is dying with too much to teach Starbride; and Katya’s brother Crown Prince Reinholt has regressed to a spoilt fourteen year old in response to his wife’s betrayal. Oh, and Starbride’s mother is coming. I just wanted to hug everybody.

The plot still moves at a fast clip, the alternating POV chapters showing Star and her princess as they try and solve mysteries, deal with courtiers and inlaws, and still find time to sleep. Their evolving relationship continues to be one of the loveliest things about these books, and the addition of Brightstriving, Star’s indomitable mother, was an excellent touch. Characterisation continues to deepen—Star’s relationship with members of the order of Vestra is in no way the name as Katya’s, and I love that. I love seeing a passionate, adoring romantic relationship flanked by friendships (and cute flirtations: Lord Hugo Sandy, your crush is still showing) of different weights and colours. Pennynail, just as I’d hoped in the last review, finds his voice. Katya also comes into her own as Reinholt goes rather delightfully postal, and her own relationships within her family are seen in a deepening, compassionate light.

The writing, while still glib (often to the good, only sometimes to the eye-roll!) and stylistically a bit odd, flows a little easier than in book one. I’m unsure if this is because of a better editing job or simply the joy of being fully immersed in Barbara Ann Wright’s world, but it gives me great hope for the rest of the series, even if it is hard to forgive a glorious, shout worthy cliffhanger that had me wishing I could get up from my bed and pace.

If you enjoyed The Pyramid Waltz, For Want of a Fiend is the perfect next step. If you haven’t read either, know that you’d be embarking on a joyous, funny, sweet and madcap ride around very dark things lovingly told, with characters who will stay with you for months after.