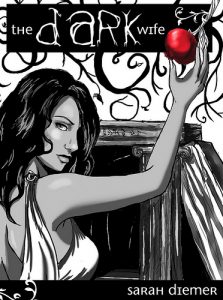 BEFORE. I am not my mother’s daughter. I have forfeited my inheritance, my birthright. I do not possess the privilege of truth. The stories told by fires, the myth of my kidnap and my rape, are all that remain of me. Forever I will be known as the girl who was stolen away to be the wife of Hades, lord of all the dead. And none of it is true, or is so fragmented that the truth is nothing more than a shadow, malformed. The stories are wrong. I am not who they say I am. I am Persephone, and my story must begin with the truth. Here it is, or as close as I can tell it.

Welcome to the world of “alternative facts”. The administration on Olympus controls the flow and shape of information. Fear undercuts the bacchanalian veneer of the ancient Greek pantheon. Elsewhere in the world, gated away in her mother Demeter’s earthly paradise, the Immortals Forest, Persephone frolics and dreams with her girlfriend, a nymph named Charis. The most fraught moment of her life is learning that she has to move to Olympus and leave everything she loves behind. In a desperate bid for freedom, the young goddess and nymph hatch a plan to runaway. And then it all falls apart.

In The Dark Wife, author Sarah Diemer recasts the Grecian myth of Persephone, goddess of Spring and Rebirth, and Hades, ruler of the underworld, from abduction and forced marriage to a kick ass romance. What starts as an escape from Zeus’ escalating machinations, transforms into a greater mission to dissemble his aggressive and destructive hold on humanity and the gods/goddesses.

While falling in love (they don’t seem to make an issue of being related; though Hades knows of this connection before she reveals it to her niece), Persephone and Hades also endure smear campaigns and risk shunning in order to take down the kingpin. They take a stand against bullying, misogyny, complicity, and rape culture. This is evident in the simple ways in which they live their lives (for example, helping bridge the gaps between the afterlife in the Elysian Fields and the village of the dead), as well as how they make a stand.

Diemer sets most of the novel in the underworld, showing us the underworld and Persephone’s evolving sense of self and purpose as she explores it with Palais, Hades’ best friend. The final face-off against Zeus feels anti-climactic, taking place within the last twenty minutes or so. Although, the other confrontations are more indirect; Zeus channels his passive aggression through manipulating the souls of the dead, in hopes that this will be enough to tear down his sister goddess.

There are a few key differences between Diemer’s version of the Greek myth and older incarnations:

First published in 2011, Diemer released the Audible version of The Dark Wife in February 2017. The audiobook, at its best, enhances Diemer’s storytelling and immerses listeners in the world she re-envisions. Veronica Giguere’s narration is pleasant overall. The tone she assumes for much of the story reflects Persephone’s emotional lens, though Giguere’s delivery does not always convey the heightened sense of drama during key scenes.

Persephone and Hades garner the most distinct characterization. Giguere invokes the vitality and innocence of Persephone’s youth and sheltered existence. Hades reminds me of a lower, breathier version of Linda Griffin, mother of Lawndale High’s fashion club president, Sandi (Daria). Zeus comes across as the petulant, whiny bully that he is. Plus, his creepy, inappropriately jolly laughter after he rapes and deceives makes your skin crawl. Secondary and tertiary characters garner less clear representations. The younger cohort of gods and goddesses, including Hebe (daughter of Hera) and Harmonia (daughter of Aphrodite), and to a lesser extent, Palais, are similarly voiced. Charon, ferryman of the river Styx, holds potential for super disturbing representation by Giguere. Given how Diemer describes the various personages embodied in Charon’s shifting frame, I expected the editing to layer different pitches and personalities that Persephone encounters on her ride across the Styx to her new life.

After finishing this quick, enjoyable eight hour audiobook, you may find you need a Daria and Xena: Warrior Princess fix.