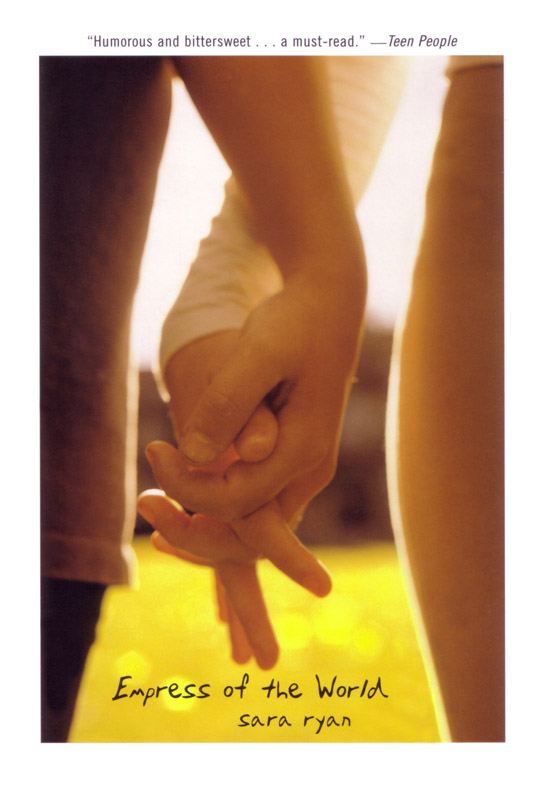 There’s something special about a good teenaged summer story, which is why human beings keep making movies and writing books about them. And Sara Ryan’s Empress of the World is our very own classic summer teen story, with the added bonus of queer sexual awakening. Published in 2001, it came out long before the apparent current tidal storm of gay YA (http://www.theatlanticwire.com/entertainment/2013/03/new-way-gay-characters-y/63563/) that the world is suddenly paying attention to. I’ve been wanting to read it forever, and what a sweet and satisfying story to wait for.

Nicola Lancaster is our main girl, and we meet her as she’s just arrived at the Siegel Institute Summer Program for Gifted Youth–essentially, summer camp for nerds. So not only is it a summer story, it’s a summer CAMP story, which are even better (although they don’t do many camp-y things and mainly just take classes at the Siegel Institute, but go with it anyway), and it’s a summer camp for NERDS story, which is the best. As is wont to happen at summer nerd camp, Nicola soon makes some wonderful, interesting friends: the amazingly manic computer geek Kristina, awkward music theory wiz Kevin, sweet sleeper Isaac, and of course Battle, of the beautiful blonde hair and lovely green eyes. In between studying for her archaeology classes and practicing her viola (nerd!), Nicola quickly begins to realize that her feelings for Battle are perhaps not just-friend feelings, and that maybe Battle feels the same way, but is that even possible, since Nicola has spent so much time enamored with boys in the past? (We all obviously know the answer to that one.) Yet it’s never with shame or disgust that Nicola questions her new feelings, but more a bit of confusion, and mainly awe. But like all summer stories, summer has to come to an end eventually, making Battle a somewhat bittersweet love interest from the start.

Nicola and her friends are funny and likeable, and Empress of the World is a quick, great read that pulled me in right away. Perhaps the used, somewhat battered copy of the novel I have helped this notion, but the writing had an almost classic, genuine feel to it, like all of the YA books from the ‘70s I grew up reading and loving. Yet at the same time, it felt surprisingly undated. The only part that stuck out was one moment when only ONE of the friends owned a camera, being as this was still the age before they all would have flipped open their smartphones, but being history, science, and music nerds as teens is timeless, and Katrina’s interest in programming still completely works.

The one thing that slightly bothered me was, as the book wore on, the gang as a whole but particularly Battle, gave Nicola a lot of guff for being over-analytical, for always having to name and classify and understand every situation and feeling and thing, to the point that it seems it might draw Battle and Nicola apart forever. Yet I personally didn’t think Nicola was over the top in this regard at all; she actually seemed rather normal for a teenaged girl. And I felt like Battle’s harping about it simply made Nicola feel ashamed of her sensitivity and thinkiness, instead of simply being okay with, and proud of, her open, vulnerable soul.

While the conclusion is somewhat open ended, a sequel to Empress of the World came out in 2007, The Rules for Hearts, and I would definitely be interested in checking it out one day, along with some short stories that were released in an updated, deluxe edition of Empress of the World last year.