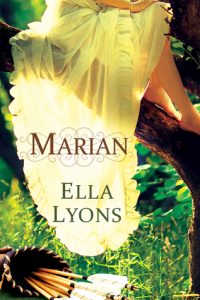 Marian by Ella Lyons is the very first lesbian Robin Hood retelling I read back in 2017, and I thought it was time to share my thoughts, after reviewing two other retellings for the Lesbrary. This book spurred me into reading as many lesbian Robin Hood novels as I could find, searching for the ideal book for me. Marian was the perfect place to start that search and promised a female Robin Hood and a lesbian romance.

Marian Banner is a young girl of fourteen, living in a small village where her father is revered for his earned position as a knight in King John’s retinue. As her father ascends in his position, Marian and her father move to Nottingham, where Marian meets Robin, a girl who dreams of becoming a knight and serving the king. The two quickly become friends, and after a short time begin to have deeper feelings for each other.

As a Robin Hood retelling, this novella acts as more of a prequel, and we see Robin and Marian develop into the heroes we’ve heard about in childhood. The familiar characters are few, limited to only Marian, Robin, Little John, Friar Tuck, and King John. (Typically, Robin Hood stories are set during King Richard’s reign, and John is still a prince. However, Marian is set after John has become King.) Notably, there is no Sheriff of Nottingham, and most of the Merry Men are not present either.

Rather than historical fiction, I think this book is best enjoyed as historical fantasy. The “historical” elements of this book stop with the names of the previous and current king. I don’t think the book suffers from this, however. Without the weight of being historical fiction, we are given two young queer girls who can freely determine their sexuality without the constraints of medieval society. Robin is forthright about her lack of desire for a husband, and Marian at once recognizes that she is the same.

Marian looked at [Robin] in surprise. It was something she’d long thought but never articulated; taking a husband sounded ridiculous. So many of the girls in Abyglen talked constantly of finding husbands and making babies, but to Marian it seemed like such an absurdity.

Without the limits of history, neither of the two girls ever express apprehension because of their attraction to each other, and the two have a very sweet adolescent romance, which is a pleasure to read. Several people around them even pick up on their attraction and are secretly pleased and supportive.

The only slightly odd thing about their young romance is that Robin and Marian kiss for the first time while bathing naked in a river, at the ages of fifteen (Robin) and fourteen (Marian), which feels a bit young.Shortly after this encounter, they are separated for three years, due to outside circumstances, and Part One of the book finishes.

Part Two begins when they reunite as older, more mature teenagers. Marian has learned how to use her femininity and place in court to her advantage and to the advantage of the poor, to whom she brings food, medicine, and money regularly. Meanwhile, Robin has achieved her dream, and will soon become a knight.

The problem for me is that I don’t understand who the target audience is for this book. While Part One makes up the book’s majority and feels very much aimed at younger readers, the second part of the book, which is much shorter, contains more graphic and mature content.

Marian is (somewhat graphically) sexually assaulted, and the same man physically abuses her. She also suffers verbal abuse, and he calls her a “whore”, and falsely accuses her of “fucking the knights in their beds”. While this kind of content certainly has its place in literature, I felt it was out of place in what otherwise felt like a middle-grade book.

Part One felt much younger, both because of the characters’ ages and the writing style. Part Two is much more obviously YA. These two vastly different types of story left me confused. I enjoyed both but having a more concentrated narrative in one style or the other might have made for a smoother reading experience.

In the end, I’m on the fence for this book. If you’re looking for a historically inclined Robin Hood retelling, or medieval historical fiction with a lesbian relationship… this is not it. If you want a sweet historical fantasy with two girls falling in love, give this a try! It’s short and sweet, and a quick read.