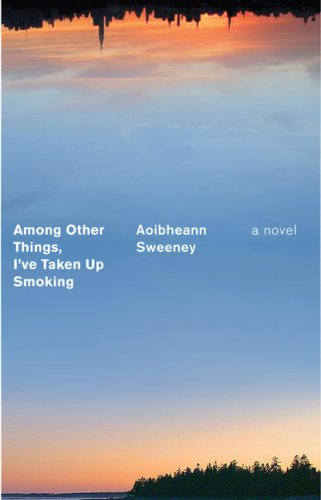 I expected to love Aoibheann Sweeney’s debut novel Among Other Things, I’ve Taken up Smoking (2007).  This, unfortunately, was not meant to be.  This is not to say that Among Other Things doesn’t have its good points.  It’s a novel whose queerness gradually sneaks up on you: a novel of subtlety above all else, and its approach to the main character Miranda’s coming of age and coming out is no exception.  It deals with the issues surrounding Miranda’s mother’s suicide, her father’s past, and his relationship with another man in the same mysterious, understated way.  I have to say, though, I appreciated this novel more when I was first reading it, and I grew to like it less as it progressed.   The reason for this, simply, is that I expected to get to know and sympathize with Miranda and it just never happened.  Also disappointing was the fact that the book never lived up to its clever title: Miranda does a lot more coffee drinking than smoking; she drinks so much coffee, actually, it’s as if she can’t think of anything else to do, even though she’s recently arrived in New York with a thick envelope of money.

Miranda is an extremely lonely character whose motives and emotions are often hard to pinpoint; she simply falls into situations and is moved around by circumstance and other characters’ decisions for the majority of the book.  At first, her loneliness intrigued me.  Miranda is a shy, solitary child who grows up on a tiny island off the coast of Maine.  She and her father, an academic immersed in the seemingly endless task of translating Ovid’s Metamorphoses, live in near isolation with only the company of one local man (Mr. Blackwell).   The parallel with The Tempest is obvious, and at times heavy-handed; I don’t see the point of literary allusion unless it’s really adding something to the text and I’m not sure exactly how The Tempest illuminates anything about Among Other Things.  In fact, Sweeney’s novel falls into the same pattern that made me find The Tempest one of Shakespeare’s least interesting plays: the female lead character (both named Miranda) is boring and practically characterless.  Sweeney also doesn’t make anything of the (post)colonial potential of the Caliban/Mr. Blackwell character.  She highlights many times (sometimes unnecessarily) that Mr. Blackwell is indigenous, but never addresses any of the political issues that Shakespeare so brilliantly and complexly sketches in his depiction of Caliban.  I could forgive the lack of attention to indigenous issues if Sweeney had addressed gender in a more complex way, but she doesn’t really do either, unfortunately.

Without a doubt, Among Other Things is full of gorgeous, restrained writing; but this doesn’t make up for its lack in emotional immediacy.  It’s hard to really care about Miranda a lot of the time.  Not because she’s unlikable, but more because you just don’t know enough about her.  I found my patience for dealing with this waning by the last section of the novel, even when the queer relationship finally picks up.  I had expected some kind of development to surface when Miranda leaves her small island for the bustle of another island: Manhattan.  But she continues to wander around in a perpetual daze, as if still caught in fog of the island where her father remains.  I wasn’t sure what either the man or the woman interested in Miranda saw in her: I mean, she’s supposed to be beautiful, but isn’t there anything else?

To give the novel some credit, there is one scene quite late in the novel where Miranda is finally emotionally vulnerable.  She experiences a revelation that Sweeney words quite beautifully:

It was a familiar feeling, anyway—being alone.  I hadn’t meant to expect more.  It had just happened, as if it were a part of growing up, wanting to be with another person.  When actually it wasn’t, when actually it only got harder, being with other people—pleasing them, disappointing them… It was just that I had never felt it before, that someone could be so close, like all you had to do was touch them, and they could see your life around them as if it were real, as if all the things you’d ever thought had made sense.

Like The Tempest, Among Other Things prominently features a storm that supposedly brings about a ‘sea change’ in the characters.  I’m not really convinced, though, by Miranda’s sudden transformation at the end of the novel, where she declares her intention of going to art school and chooses the girl over the boy.  Does the fog that surrounds Miranda ever really disperse?  Perhaps by the time it does, showing you a glimpse of Miranda’s character and motivations, it’s a bit late to make the effort to become invested in her life.  It’s unfortunate that a novel with some stunning lyrical moments is overshadowed by its shoddy characterization and predictable plot, but there it is.  I’d be interested to know if Sweeney writes poetry: it seems like a form that might showcase her talents to more advantage, if this novel is representative of what she can do with fiction.