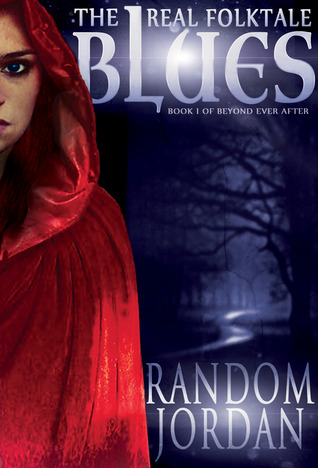 The Real Folktale Blues, Book 1 of Beyond Ever After by Random Jordan

Gnidori has not always been a bounty hunter; in fact her first job was as a simple delivery girl wearing her trademark hooded red cloak. However, after her choice surrender of her former position as a Faerie Godmother, she was left with a young girl she had very nearly married to Prince Charming, and an entirely new life filled with simple quietness. That is, after she sealed away her magical talents. Why was her magic sealed away? Well, as she would put it: nothing is ever simple when magic is involved. Years with her magic stripped from her, and Gnidori is drawn into a plot spurred on by Prince Charming once more. She finds herself seeking the Big Bad Wolf, who has returned from death and comes to realize there is more to what is going on than she was told. Before long she encounters a tower fuming yellow smoke and a baby fox born from a human heart. But that’s only the beginning. Can Gnidori survive pirates, faeries, dragons, mirror spirits, time spells, gnomes; and even the most sinister of all: Bluebeard’s Tower? And all without access to her magic?… or maybe she does have it? Beyond Ever After is a series following the chronicles of Red Riding Hood with countless other Faerie and Folktale characters long after or even before their happily ever after. This is not a faerie tale retelling; it asks the great question: What happens beyond the happily ever after?

It’s been a long time since I have found myself smiling through an entire book but that is exactly what I found myself doing while reading this one.  This is the debut book from Random Jordan and she weaves an interesting tale full of childhood fairytale characters.  Now don’t run off thinking this is a children’s book or even a fairytale.  The reader is introduced to the person behind the legend and it’s fairly clear that the legend is not the person.  Rather a small aspect of that person.  In some ways it reminded me of the labels we tend to affix to people and how that label becomes the defining characteristic for that person, whether it’s accurate of not.

The story itself is fairly complex and introduces the reader through a variety of characters while Gnidori is trying to determine who has stolen her cloak and seems intent on killing her.  There are a couple of places in the story that get a bit confusing because there is an element of time travel.  However, I found that it was cleared up fairly quickly.  I’ll be interested to see what happens next for Gnidori, Ash, Etti and the rest of the crew.  Overall I found this story intriguing and fun to read.