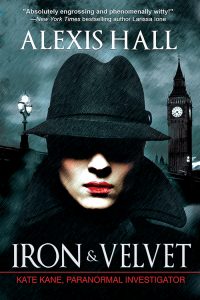 Look, the books I’m talking about here were released at a time when –

So after four years of going through some intense self-reflection and some brief boycotting of vampires altogether, I realised that I still loved vampires–I just like them as lesbians now.

Which is when I found these books.

The Kate Kane series is literally my go-to comfort read, next to the Whyborne and Griffin series. I mean, a wisecracking lesbian detective with a sense of dark gallows humor that made me emote and laugh my ass off, annoying whiny emo stalker ex-boyfriends who give me a sense of teenage romance lit catharsis, motherfucking hot vampire princes and interactions ranging from awkward to near “sex against a wall” with faery ex-girlfriends, werewolves and Tash the Teetotaler Lesbian: how could I not love this series?

I didn’t think I’d be reviewing this, because I really wanted more and was super bummed there wasn’t, but when Alexis Hall announced he’s going to be writing more of this series, I had to gush about this for a bit.

So this series is darkly funny supernatural detective stories following half-faery half-human, noir  detective stereotype but gay Kate “Katharine” Kane. The book starts with her being hired to investigate a werewolf death outside a club owned by the “Prince of Cups” Julian Saint Germain before &%$& starts getting real between the werewolves and the vampires.

Julian is hot, flirty, and super interested in Kate. The only thing is, Kate has issues with vampires because of said dickhead creeper ex-boyfriend from high school who’s still leaving her portraits on her pillow–because you know… a good guy does that, not his literal evil soulless alter ego.

(Gold star for everyone who gets this reference and for people following AH’s twitter thread of Giles lust!)

With scary dodgy powers she draws on from her scary morally dodgy mom, the Queen of the Wild Hunt, dealing with the guilt and regret of the death of her partner and sometimes epically bad shagging choices while dealing with vampire politics, werewolf supermodels and even Witch Queens to investigate her case, Kate is the epitome of Disaster Lesbian and really shouldn’t be dating hot sylph-like vampires but oh look wait now she’s eating meringue with her.

The book is so freaking funny and hot with a distinct kind of British “we might as well all die now” humor with Kate and Julian’s push and pull dynamic, funny as all hell running gags of Kate’s constant imagining of her gravestone with inscriptions describing increasingly embarrassing, hot and mundane ways she could die during her investigation and “fucking Patrick” getting punched a lot which made me laugh and yay in my heart of hearts. The next book just gets weirder and hotter, where she is not only trying to do her day job, but also has to deal with some faces from the past, hot sex, strange new roommates, other people’s girlfriends, literal trials and occasional tales of the Pudding Nun’s various adventures.

I have a weird sense of what’s comforting, but it’s any book that makes me laugh so much and yet it also helped me confront my vague sense of shame I felt being super into something that is decidedly problematic as a teenager. I had liked Twilight as a kid, and yes, I was a dumbass teenager, but just because it’s making a comeback on the internet, don’t mean I have to be ashamed and avoid it like it was the plague, just punch it and get on with my day.

It was just a phase after all, and if you’ll excuse me, I’ll be out looking for my own motherfucking vampire prince now!

Definite four and a half stars, the half for the catharsis.