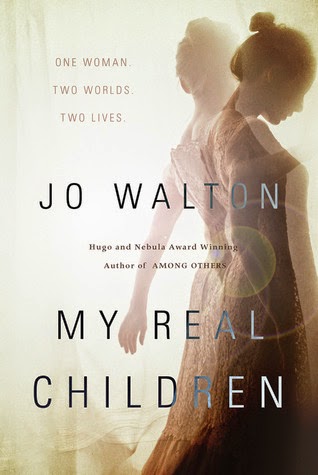 My Real Children is terrifically problematic in the best possible way. Patricia in 2015 is at the end of her life, relegated to a nursing home, left mostly alone by her family–but until she opens her eyes and sees the colors of the curtains and which side of the hallway the bathroom is on that day, she doesn’t know which family. Because after a certain specific point, Patricia’s life bifurcates, and she has two complete sets of memories. She’s lived two separate lives. In two separate worlds, with two separate histories (in one, JFK survived; in one, nuclear bombs have been dropped; in both, there are research bases on the moon).

Which one is real? Which one does she want to be real? Does want have anything to do with it? It’s not as simple as choosing the life in which she was happier. In one life, she had a miserable marriage to, and divorce from, Mark. They had four living children and number of babies who were stillborn. The world in general was a pretty open and accepting place, and Patricia (in this life, Trish) found a great deal of personal satisfaction in civic involvement and in enjoying the achievements of her children. Trish didn’t get the solid connection and commitment of the deep romantic love that so many people long for, but she contributed consistently to the betterment of the greater world. And it was a pretty good world.

In the other life, Patricia (Pat) found personal fulfillment in her career and in her loving relationship with Bee. They had three children, but had to be furtive about parenting, because this world moved into darker, less accepting times, and co-parenting lesbians were in constant danger of being reported to social services. Pat found great personal loves–she fell in love with Italy and found a way to make this soul-feeding appreciation the basis of her career. She found Bee, the love of a lifetime. Pat’s efforts contributed consistently to the betterment of her family’s world. The world at large–well, that wasn’t so great.

Trish’s focus was outward; Pat’s was insular. This is the most stark case of “What if it’s not all about you?” you may ever read: Patricia thinks, at one point, what if the salvation of the world comes at the expense of her own happiness? Well, what if? “What if?” is the jumping-off point of the best stories, and the most heartbreaking; and I’ve spent a good amount of time trying to work this out, trying to find crossover points, trying to make it work, but there are no easy answers. On the one hand, that makes this book great for book club meetings. Yes, you should sacrifice your own happiness for the sake of humanity! Or, no! Let humanity fend for itself, because love is a rare and beautiful thing, and when it’s found, it needs to be nurtured and cherished.

My Real Children is fascinating in a number of ways, but be warned, it will affect you. I spent the last chunk of it sobbing. (I am not the only one. Cory Doctorow apparently did the same thing, and couldn’t even face writing his review after he finished reading the book. He needed to take a breather.) One of the best things Jo Walton does with her main character is this: it’s clear that although Patricia makes a choice at one point that splits her world’s fate, both Pat and Trish behave in ways that are faithful to the core of the person Patricia. No matter what is thrown at her, the fundamental makeup of the character is the same. I loved that faith in the fundamental Patricia-ness of the main character, the vote of confidence in our basic nature being fixed, no matter the context. I also loved the “Please, we’re so past that” attitude toward homophobia in the latter part of Trish’s world’s 20th century.

What I didn’t love, because it wasn’t fun to think about, is Walton did a painfully effective job of pointing up the dangers of insularity. You don’t get to take a lifetime off. External engagement is necessary. Walton gives us extremes. Here are both sides of the spectrum: What can we do with that? Is there a balance? Unhelpfully, we get to see these stark examples, but not any ideas of how to…how to have it all. Can you? I think, yes. This is one of those books I read at the right time, while debating these things in my own life, wishing I could stay in my happy little enclave with my happy little family and my happy little job for the rest of my happy little existence.

Yeah, no. And don’t think that by being in a loving, supportive relationship you’re putting enough good karma out into the universe to let you off easy. According to My Real Children, you aren’t. So: engagement with your world, both your home world and the world at large. Get on it, please, because the universe could fall apart if you don’t get all that under control. Also, try this as a gateway drug on people who think they don’t like science fiction.