Deep Deception is the third book in Cathy Pegau’s science fiction/romance series set on the chilly mining colony of Nevarro, after Rulebreaker and Caught in Amber. The latter features a m/f couple, and the former, which I reviewed here at the Lesbrary, was one of my favorite books of 2011. Deep Deception is scheduled for release at the end of this month, and it may be my favorite of the series so far. I stayed up very late to finish it, at any rate! 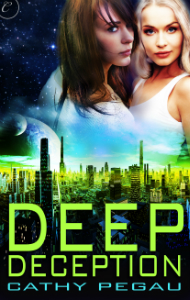 Readers of Caught in Amber will recognize the mysterious Genevieve Caine as the right-hand woman of the menacing drug dealer who was the target of Nathan Sterling and Sasha James’s operation. Since that time, Genevieve has moved on and is working hard to avoid notice by the sinister Reyes corporation until she can leave Nevarro far behind. Unable to reach Sterling, she targets his colleague Natalia Hallowell as a likely candidate to help her uncover whatever wrongdoing the Reyes family is hiding in a distant mining town. Unfortunately, their introduction sows both the seeds of deep attraction and mistrust, as Genevieve seduces and then sedates Natalia in order to state her case.

Despite being tricked by Genevieve during their initial encounter, Natalia is no fool. She’s an experienced agent with the Colonial Mining Authority, and accustomed to operating in deep cover. She’s also on probation and not unwilling to investigate Genevieve’s claims, especially if it will occupy her mind. As the women travel together to probe the mystery in the mines, they struggle to trust each other without giving too many of their closely guarded secrets away–or their hearts. For Natalia, returning to the mines means bringing up memories from her painful past. For Genevieve, the stakes are higher than she will ever willingly confess, even to someone she is falling for.

I really enjoy the way Pegau has created the atmosphere of Nevarro throughout the series, especially the mining details that she provides in this third installment. The chemistry between Genevieve and Natalia is palpable, and I appreciated that their relationship had some time and reason to mature. The return of characters from Caught in Amber was also a nice touch, giving even more continuity to this romance series that so far has included both straight and lesbian couples. Why on earth can’t more series do that?