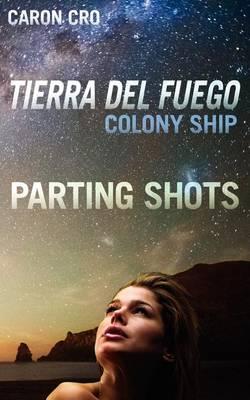 I haven’t read a lot of sci fi, and to be honest, I was little hesitant to start Parting Shots. I was pleasantly surprised! This is a complex book. Theoretically, the main character is Trevathan Evans, an officer and experienced space traveller. She has a tragic romantic past with a lover who was taken back into the fold of a cult. But there is a huge cast of characters in Tierra Del Fuego, including Trevathan’s friends and shipmates. Personally, I thought Evangelena stole the show. She works with gorillas on Earth, doing research on their ability to communicate using melodies. She is also absolutely loveable and charming. She too has a complicated romantic link back on Earth. One couple, Jazzmin and Anjelica, both black women, play a fairly minor role in Parting Shots, but I expect to see more of them in the next books in the trilogy. Another intriguing character is Avery, a bisexual chef who is occasionally Trevathan’s lover and brags about a piece of sex toy technology she has that many queers would be jealous of: an “extender”. (If you haven’t noticed, all of the women are queer.) Those aren’t even all of the main group in Parting Shots.

On top of that, Tierra Del Fuego created what I thought was an interesting world. It is 2088, and on the one hand, it is completely futuristic. People have brain implants to assist their memory and language capacity. Countries have conglomerated into giant continent units. The USA has completely lost power in the world. A colony ship is being launched that is large enough to have enough roaming ground for elephants. Children are only conceived with permission from the government. Dangerous cults threaten space travel with nano technology. On the other hand, the Tierra Del Fuego is the very first colony ship launched into space. It is still in the early stages of this technology. The situation on ship is fragile, threatened by both outside forces and internal power struggles that threaten the utopia promised to them. All people on board are equal, with equal resources allotted to them, but they were only able to come on board by paying huge amounts of money.

There is a lot in Tierra Del Fuego to contemplate. The people on board are randomly assigned an embryo if they want to have a baby. This embryo is probably mixed-race, ostensibly for gene variation (I say ostensibly because isn’t the vast majority of gene diversity in Africa?), but also because Jazzmin, the physician who worked on this initiative, proposed that this would end racism. The research and technology detailed in Parting Shots seems not so far away from now. And the plots–a shoot-first ask-later captain attempting to seize power, corruption in the brand new elected government on board the ship, threats from cults that disagree with all of the colony ship’s ideals–definitely grab your attention. And the characters are dynamic and interesting. I can’t wait to find out more about them.

There are some weak areas in Parting Shots. There are so many characters introduced in this first book that it’s hard to remember them all. The perspective also switches between them constantly. This is fairly straightforward early in the book, but once everyone’s lives begin to converge, you begin leaping between all of their heads with very little warning. You also get the perspective of some minor characters when it is convenient. The large cast I’m sure will be less overwhelming after this first book, but the quick perspective changes were disorienting. Also, although some of the technology is described very specifically, some things–like how a ship that gigantic was able to launch from Earth–are not explained at all. And there were a few typos, but those were rare.

Overall I was really impressed by Tierra Del Fuego. I haven’t read a lot of sci fi, and I very rarely start series that haven’t finished yet, but now I am eager for the next two book in the trilogy! I highly recommend Tierra Del Fuego for its great queer women characters and its intriguing premise and plots.