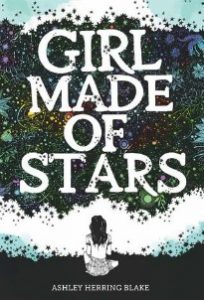 Trigger warning: discussion of rape in review, description of rape, PTSD/panic attacks, and rape culture in the novel

Ashley Herring Blake’s previous novel, How To Make a Wish, was a 5 star read for me. So of course I put a hold on her newest YA as soon as it was available. I wish I had remembered the subject matter before I so eagerly requested it, or I would have put a little more space between reading Not That Bad: Dispatches from Rape Culture and this one. Mara and Owen are twins, and they have always been very close. They love to sit out on the roof looking at the stars together, spinning ongoing stories about themselves as the Gemini constellation. And if he gets a little rowdy at parties, it’s only in a lovable, goofball way. So when Mara best friend, Hannah, accuses Owen of rape, Mara is horrified. She seems to split, believing both of their conflicting stories simultaneously. And as she tries to sort through it, her own unaddressed trauma bubbles to the surface.

This is such a difficult, thorny book. I was a little bit worried about how it would be handled when I read the description, but I knew that if anyone could pull it off, it’s Ashley Herring Blake. Mara never doubts Hannah, but she has difficulty matching that to the consequence that her brother is capable of this (and is lying about). At school, the students begin to separate into “Team Owen” and “Team Hannah” (a much smaller faction). Mara’s previously fiercely feminist mother scolds Mara for the barest suggestion that Owen may not be innocent. Her world seems to turn cruel and unpredictable. The people you love and trust become strangers. The authority figures meant to protect you victimize you. Where Mara would usually lean on Charlie, her previous best friend and girlfriend, a barrier has formed between them since their break up.

Although this is a dark and uncomfortable read, it does also have hope. A mild spoiler: when Mara shares her experience with Hannah, they find strength and support in each other. They are able to understand each other without explanation. Although most of the school turns against Hannah, she does keep a core group of fiercely loyal friends. There is also a complicated relationship between Mara and Owen’s best friend, Alex. They had always just been in each other’s periphery, but they seek comfort in each other as they both struggle to reconcile this new version of Owen with the person they’ve known and loved for so many years.

There is so much going on that I haven’t even gotten to talking about Charlie. Since her and Mara’s break-up, they’ve lost the easy friendship they had previous to their romantic relationship. There is an undercurrent to this story that is about Charlie’s struggle to understand her own gender identity. She seems to experience some fluidity, which causes her to feel dysphoric about her voice at some points, and happy with it at other times. She isn’t out to her parents as genderqueer, though they are supportive of her and Mara’s relationship.

Girl Made of Stars faces rape culture head on. It had my stomach in knots, but I couldn’t stop turning the pages. I finished it one day–partly because Blake’s writing is captivating, partly because I was so invested in these characters that I wanted to know what happened to them, and partly to be able to walk away from this sickening situation. It’s not an easy read, emotionally. It was especially difficult to deal with the fact that Owen was not some abstract villain. He was someone that Mara thought she knew. And someone she will have to live with, and will likely still love, for the rest of her life. How can she reconcile that?

This was another 5 star read for me, and I will definitely be picking up anything Ashley Herring Blake writes in the future.