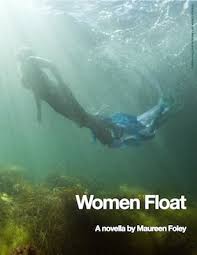 Anyone who has ever seen me on the internet for any length of time knows that I wish all stories could be made into audiobooks. I spend half my life legally blind. It would make me happy. But I’m also sure that even average narration does one of two things to most stories.

First, it can cover up a multitude of sins, if the story needs it. I can’t tell you how many books I’ve managed to listen to—and quite enjoy!–in audio form when I would have winced and put them away if I was reading the same from print. Second, when your story is good—when the language flows and the story is strong and dialogue feels real—hearing it read aloud can be beautiful.

Mo Foley’s Women Float falls into the second category. It is a tightly written, often lyrical novella that touches on friendships and grief and secrets that are better unsolved.  It is also completely outside of my literary comfort zone. I read children’s books and space operas. I like it that way. When I picked up Foley’s novella, I had no idea what I was getting into.   The blurb given by CCLAP is clever, so I’m going to include it here.

Lonely California pastry chef Win never learned how to swim, despite growing up just miles from the Pacific Ocean. Even Janie, her flaky pro-surfer single mother, couldn’t convince her to brave the water, solidifying Win’s fear when she leaves her at the tender age of 9. But when Win turns 29 and decides to take swimming lessons for the first time—finally confronting her hydrophobia and trying to make sense of why her mer-mother suddenly swam off all those years ago—she must also deal with a desperate crush she’s developed on her New Age neighbor, mysterious postcards that keep arriving in the mail, and her bad habit of pathological lying

That’s a lot of story in eighty-eight pages. My main problem with ‘literary fiction’, genre reading peasant that I am, is that it is often difficult to engage with the characters through all of the navel gazing. There are stretches of text that, if the story was made into a film, would roughly translate to someone staring out past the camera at…cormorants, or a beach ball, or something equally strange for 30 minutes. There are too many words, not enough voice. But Win is a warm, wry presence who had me with her nine-year-old commentary on mothers and boxed cake mix on the third page. Because of this—because of the mix of characterisation and dialogue, humour and vivid imagery—I was able to pay attention to Win and her town. Her voice keeps kept me grounded, even as lush descriptive passages made me want to stop and read things aloud. The mix is both lovely and necessary, and you’ll hear both in the chapter excerpt.

The troubled, determined woman she grows up to be was a pleasure to meet and read, and her relationship with her particular edge of California—both its landscape and its people—shifted like the water that comes up so often as metaphor in this text. It was by turns immediate and remote; sweet and compelling; dangerous and changeable and constant and, before I drown you all in adjectives, far more hopeful than I initially gave the story credit for.

(The other reason literary fiction and I don’t get along? Unsatisfactory endings. None to be found here.)

At the end of this review is an audio excerpt. Maureen did a fantastic job, one that just makes me wish that a full production could be done of the piece. Ignore my rambling, enjoy her words.

[See the rest of the tour here.]