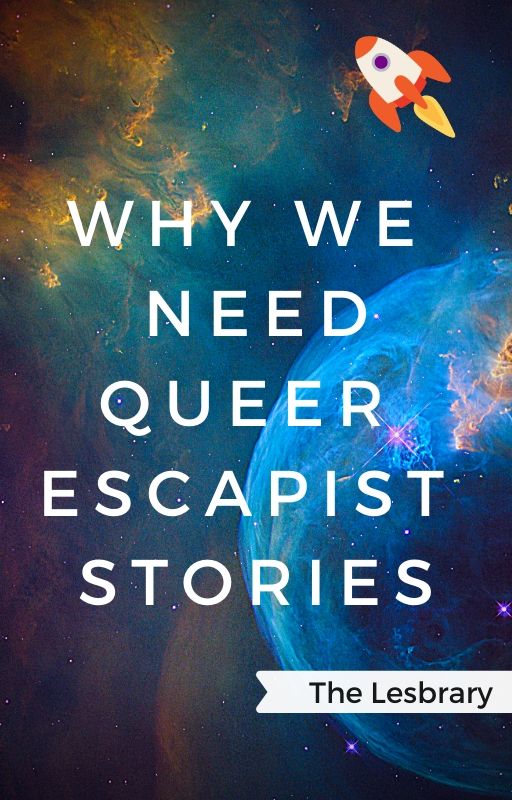 When asking a reader why they spend so much time reading, the most common response seem to be some version of “to escape”: to entertain themselves, to distract themselves, and to immerse themselves in a life that isn’t their own. And although that’s not the primary reason that I would give for reading, it seems to be the most popular one, which got me to thinking… If most people read to escape, why do queer readers so desperately seek queer books?

After all, escapism should just require reading about a life that’s unlike your own, so shouldn’t queer people be able to escape into straight/cis literature? Are these queer readers not reading for escapism? That seems unlikely, given the demand for more queer sci fi and fantasy, the genres most identifies with the “escapist” label. Maybe part of this is simply trying to avoid cissexism and heterosexism in our escapist lit–a sure way to launch a queer reader out of the story. I am reminded of Amal El-Mohtar’s brilliant essay in Queers Dig Time Lords:

There’s a lot to be fought and a lot to be fought for when you’re a queer woman of color with a hunger for stories: consuming film and television and books is often like being handed beautiful, elaborately sculpted meals with bits of cockroach poking antennae and carapace out of the sauces and soufflés. You try to eat around the bugs, try to surgically remove them, but you can’t quite get away from the fact that they’ve flavored the dish and will probably make you sick. But you have to eat, or go hungry.

Or is it that escapism requires a protagonist that is relatable? Do we need to be able to mentally trade places with the main character in order to escape fully? I think there is something to that, but I think it goes even deeper than that, and it’s not just looking for the absence of homophobia or transphobia. It’s something I’ve heard mentioned before about people of colour representation in speculative fiction, too: if you’re reading a book that doesn’t include queer characters, it implies that queer people don’t belong in the story. And this is true of any marginalized group: if a story doesn’t include people of colour, people with disabilities, queer people, trans people, a irrepressible question emerges–what happened to them? (Really, if you’re imagining a future without marginalized people, the implication is genocide–how else would you end up with all cis/straight/white/neurotypical/abled people?)

That’s the thing about “diversity”: it’s reality. Shonda Rhimes at The Human Rights Campaign Gala spoke about how she dislikes the term “diversity” and instead says that she is “normalizing” TV.

I am making TV look like the world looks. Women, people of color, LGBTQ people equal WAY more than 50% of the population. Which means it ain’t out of the ordinary. I am making the world of television look NORMAL.

I am NORMALIZING television.

You are not alone.

Whether it’s a horrific dystopia or a silly space romp, that implication makes it difficult to “escape”, because the truth is, we’re already all too familiar with that sentiment.