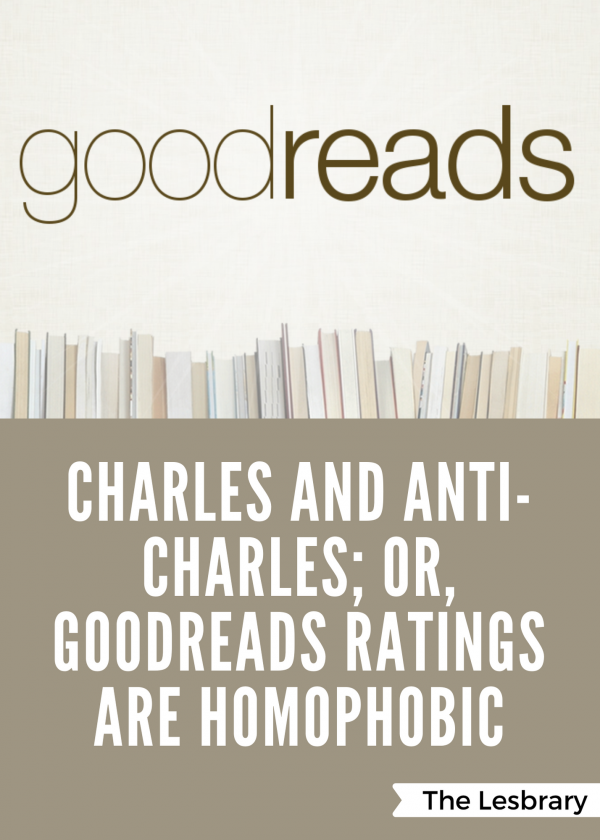 Everyone who uses the Goodreads ratings system seems to use it differently. Most of the time, this is a harmless difference of opinion: your 3-star opinion may be my 4 star. Despite these discrepancies, though, we all know what the stars are supposed to represent, right? They say right on them: 1 star is “didn’t like it,” 2 stars is “it was okay,” and so on. It turns out, though, that under Goodreads rules, you can rate a book anything, with or without reading it, for any reason. And that brings us to the problem of Goodreads Charles.

Who is Goodreads Charles?

Imagine that you are an author whose queer book is about to be released. How exciting! You are still going through the final edits, and ARCs are not released yet, but you do have a Goodreads listing of your book up. It’s being added to lists like “2020 Queer SFF,” and you’re looking forward to (and terrified of) people adding it to their TBR. But you already have your first rating! It’s from a Goodreads member named Charles (no profile picture), and it’s 1 star. Oh no! You go onto a Facebook writer’s group, and vent a little about it. Soon other queer authors comment, saying, “Welcome to the club. You’ve been Charles’d.” 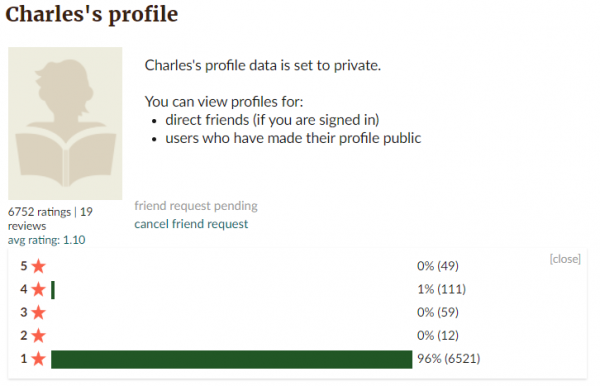 This is Charles. If you click on their average rating (1.10 at the time of writing this), you can see their ratings breakdown: 96% 1 star. Over 6,500 1 star ratings. If you are an avid reader of queer books, that name may be familiar. And that’s because almost every popular new queer book (but especially queer women books) will have a 1-star rating from Charles. Often months before ARCs are available, never mind the final product.

K. Aten knows about it. She’s been trying to get Goodreads to delete the Charles account for at least a year. One day she took a screencap of the stats to email Goodreads. The next day, she checked back and 500 more books had been 1-starred overnight. Charles is well known by authors of f/f titles: in fact, one author planned to hand out stickers about Charles at the next “lesfic” convention, the Golden Crown Literary Society:

The more I heard about Charles, the more interested and confused I got. Who is Goodreads Charles? Which books do they target? Isn’t that against the rules? Why do it? And why does it matter? Let’s go through these one by one.

When looking through Goodreads message boards, Twitter, and Facebook, I found quite a few people talking about Charles. Some seemed to say that they target LGBTQ books in general. Others said that lesbian fiction was hit the hardest. Some said that both authors of colour and LGBTQ books were getting Charles’d. Because Charles’s profile is private, I can’t go through and see all of those ratings. So I did a very unscientific survey, trying to hunt down all the Charles 1 stars I could find. (I never did find the few books rated 4 or 5 stars. What are those about??) Here’s what I found: the vast majority seemed to be F/F titles, with some other LGBTQ books, and a sprinkling of non-LGBTQ books (about 1% of the books rated). I couldn’t see many authors of colour included, and no non-LGBTQ authors of colour.

One trend I saw, though, was that most of the books Charles’d were on LGBTQ book lists, especially of upcoming releases. It seems like Charles went through every book on lists like 2020 Queer Sci-Fi Fantasy or 2020 Lesbian Releases and 1-starred every book on that list. You can check out the list of Charles’d books I made, in case you want to check out some of the excellent titles and Goodreads lists linked there!

Charles is prolific, but not consistent. Some authors are Charles’d multiple times, but other have many LGBTQ titles, and only one gets Charles’d.

A user rating books 1 star for having queer content, especially without reading it, sure seems like it would be against the rules. You can’t really rate a book without reading it, can you? But then again, how many times have you seen GIF-filled, bubbly 5-star reviews saying “I can’t wait to read this”? If that’s allowed, is the opposite, too?

According to Goodreads review guidelines, the only rules for ratings are:

We will not tolerate abuse of our ratings system, such as rating the same work more than once for the purpose of inflating or deflating the book’s average rating. Multiple ratings we determine to be abusive will be removed.

Reviews that are harassing or threatening, or that contain hate speech or bigotry. These will be deleted outright and anyone posting them risks being removed from the site.

So you can’t rate a book multiple times to skew the ratings, and the review can’t include bigotry, but that’s about it. As long as you’re not leaving reviews or doubling up on ratings, it seems like 1-starring books for the content is completely allowed, and whether you’ve read it or not doesn’t play into the equation. And that’s what a lot of authors found out when they tried to report Charles:

Another email response said to report if reviews have hate speech or threats, but otherwise they’ll be left up.

At first glance, this seems too obvious to ask. An account rates thousands of queer books 1 star without reading them. It’s a pretty open and shut case of hate, isn’t it? They’re ratings hundreds of books in a night. That’s dedication. But here’s the weird part: this account isn’t just 1-starring popular queer books. They are really digging into some obscure titles, ones that the average reader isn’t aware of.

S. Lynn, a queer author whose been researching Charles, emailed with me about it, and they mentioned that some international users use stars differently, sometimes using 1 star as the most positive. Other people mentioned that they’ve heard of people 1-starring books to come back to them, as a way of adding them to their TBR. (But…there’s a TBR shelf…why…?)

Multiple authors shared that they had been told Charles uses 1 stars to indicate a book they want to come back to:

Plus I got this comment right after publication, on FB: Just don't take any notice of the marks on Goodreads by Charles, who marks books with 1 star to indicate that they have not been read yet!!!!

To add to this theory, another author said that after several months her one Charles 1 star was changed to a 5 star, though, confusingly, another author had Charles TBR her book and then 1 star it later.

In fact, not only have some people claimed to know that Charles’s 1 star is meant as a TBR, there are rumours that Charles is actually an f/f fiction author.

Why Does Charles Matter?

Okay, so one user is 1-starring books without reading them. It’s probably not even done maliciously. So why does it matter?

Also, as an indie author (who doesn't use Kindle Unlimited), I have much fewer reviews, so the 1 star did significantly impact my average.

(More on Anti-Charles in just a minute!)

Here’s the real problem: on Goodreads, average rating is king. You can have thoughtful reviews extolling the life-changing brilliance of your book, but if your average is low, many readers won’t take a chance on it. If Charles was only rating well-known, already-released books, that 1-star rating wouldn’t mean much. But because they are rating books that are not-yet-released, and rating obscure books, often Charles is the only rating, or one of a handful.

And to me, this is what is so important about Goodreads Charles: it reveals the arbitrary nature of Goodreads ratings in general. Anyone can rate books without reading them for any reason at all. But those meaningless reviews have real consequences. Fewer people want to pick those books up, because they think the low ratings are a red flag. Here are marginalized authors, people who are already susceptible to more barriers in publishing, a smaller marketing budget, and a less-receptive audience, and this is just one more hurdle.

It doesn’t matter whether it’s done maliciously by Charles. It means that just as a queer book is getting some buzz, being put on LGBTQ Goodreads lists and linked to, their rating will get tanked. Right when it has a spotlight first being shone on it, it will have that working against them.

Luckily, other Goodreads users have decided that two can play at this game.

Meet TheAntiCharles007. Goodreads average: 5 stars. Just like Charles, I have no idea who this person is in real life (though I would love to know!) Presumably, though, they are another queer book fan, and have decided to try to neutralize Charles as much as possible. Every book they find with a 1 star Charles rating, they 5 star.

It is a noble effort, and Anti-Charles is a hero for our times, but the odds are stacked against them. For one thing, Charles is just much more prolific than Anti-Charles. There are many books that have been Charles’d that the Anti-Charles hasn’t evened out yet. And, annoyingly, 3 stars isn’t really viewed as a neutral rating on Goodreads. It’s still seen as low.

Unfortunately, Charles isn’t the only problem.

While I find the question of Charles fascinating, they are not the only user affecting Goodreads ratings: they just showcase how these ratings can be affected by homophobia, and they’re far from the worst.

Charles might be the most prominent example but I think there’s a larger problem with homophobia (and transphobia) giving queer books lower ratings.

Author Alex Logan shared more examples of users who skew queer books’ ratings downwards, including Applecat, who has “charming shelves like ‘transing-children’ and has given 1-stars to 51 trans memoirs and LGBTQ kids books.”

These are only the most obvious examples. The truth is, it’s far from unusual to come across an LGBTQ title with reviews that say that the F/F romance was “unnecessary” and “distracting,” so it affected their rating. Or that it has “forced diversity.”

And those are only the reviews that say it outright! Imagine how many more people rate LGBTQ books lower, but know better than to admit it in their reviews. Or who aren’t even aware that the reason they didn’t “connect” with the character was their own homophobia.

The Goodreads rating system skews LGBTQ books’ ratings downwards. It allows for homophobia, as long as it’s not outright threats or hate speech. That means that, Charles or no, queer books on Goodreads are likely not going to have as high a rating as the equivalent non-LGBTQ book. It’s impossible to say how big that gap is, but it’s there.

So what does that mean for you? Well, you can always start your own vigilante Charles. (Meet AntiCharles008!) You can go through LGBTQ Goodreads lists and read, review, and hype them. But maybe most of all, you can stop paying attention to star ratings. The way that Goodreads allows users to rate now, those averages are meaningless at best and actively discriminatory at worst.