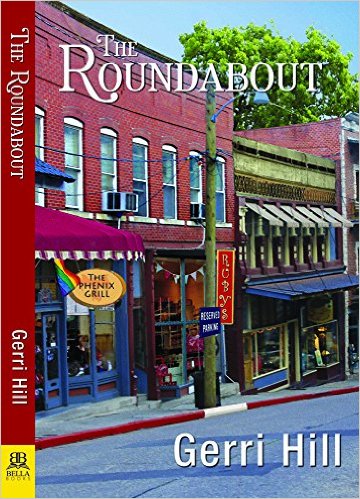 The Roundabout is a gentle, lighthearted romance – with one serious flaw, which unfortunately is a deal-breaker.

In the small and very gay town of Eureka Springs, an unattached queer woman is apparently a hot commodity. Megan Phenix is being courted by a variety of women whom she has no interest in dating – and when newcomer Leah Rollins arrives in town she is pursued as well. Naturally, the two make a pact and pretend to date each other to stave off the unwanted overtures – but the lines between truth and make-believe start to blur, and Megan and Leah begin to fall for one another.

The romance is cute – the whole “let’s pretend to date – oh whoops, we’re falling in love” thing reads like goofy rom com. Sadly, something happens at the beginning of the novel that completely taints any enjoyment one might get out of it: Megan gets drunk at her birthday party and ends up falling asleep in the bed of Mary Beth, one of her would-be suitors – who proceeds to take naked pictures of her while she is sleeping. Mary Beth then posts the pictures online, with recognizable details removed, and tries to blackmail Megan throughout the rest of the book, telling her she will post the pictures in their entirety if Megan does not go on a date with her, despite the fact that Megan repeatedly asks her to take them down.

Taking naked pictures of someone while they are sleeping is sexual assault. Posting those pictures online is online harassment. But for some reason this sickening behavior is shrugged off throughout the entire novel – Megan expresses her intense discomfort with Mary Beth’s behavior and other characters repeatedly tell her to lighten up, and ultimately this disturbing plot line is never resolved in a way that makes it clear that this behavior is disgusting and predatory.

It’s too bad, because there was otherwise a lot to like about The Roundabout – it depicts a romance between women who are closer to middle age than the first blush of youth, and it showcases one of those wonderfully idyllic romance novel towns in which almost every single character the reader encounters is queer. But the issue of taking and posting nude photos without the consent of the person in them is a very serious one – and this novel’s lighthearted treatment of it is thoroughly repugnant.

2 Replies to “Tierney reviews The Roundabout by Gerri Hill”