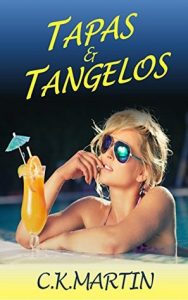 Sparks fly when Hayley and Kate first meet at a hostel in Spain–though the two have only just met, they end up falling into bed together that same night. They are drawn to one another despite their differences–Hayley is a Brit in her mid-thirties who runs a bar on a small Spanish island, and Kate is an Aussie in her mid-twenties, just passing through while backpacking. Hayley makes allusions to her unhappy past, and tries to distance herself from Kate, but to no avail: the two are drawn to one another, and begin to fall for each other. But just as they take their relationship to the next step, Hayley’s past unexpectedly catches up to her, leaving Kate feeling betrayed and their relationship hanging in the balance.

Let’s cover the good stuff first: this is a satisfying romance, with smooth writing that keeps the story flowing from one chapter to the next as the novel shifts between the character’s perspectives. It’s well-written–the steamy scenes between Hayley and Kate are sweet, with none of the cringe-inducing turns of phrase that sometimes seem to plague the more passionate moments of romance novels. Tapas and Tangelos is definitely an enjoyable read.

On the other end of the spectrum, some of the plot points and pacing leave a little to be desired. The specifics of Hayley’s tragic past really threw me for a loop when they were revealed: the revelation was completely unexpected, had very little build-up, and didn’t seem to fit with the previous mood of the novel. *spoilers* It is revealed that Hayley’s father was a serial killer who was caught when she was fifteen, and she was suspected of being an accomplice, despite her young age and the fact that she had no idea–so she moved to Spain and began living under an alias. It’s a very dramatic revelation that just doesn’t match the lighter mood of the rest of the novel: it feels heavy-handed in its treatment. *end spoilers*

There’s another odd (and tired) plot point that wasn’t my favorite: Hayley sees Kate talking and laughing with a guy from the hostel, and realizes she has fallen for Kate because of how jealous she feels, and proceeds to bemoan her broken heart because clearly Kate is in love with this man with whom she is having a single positive interaction. There are also some minor pacing issues: the novel’s denouement happens very quickly, and though there is an epilogue tying things together, the final moments feel a little rushed.

All in all, I would recommend Tapas and Tangelos: the solid writing certainly makes up for most of the novel’s oddities. Hayley and Kate are well-rounded characters whose budding romance is sweetly engaging. Give this book a read if you’re a fan of enjoyable and (mostly) realistic queer lady romance.