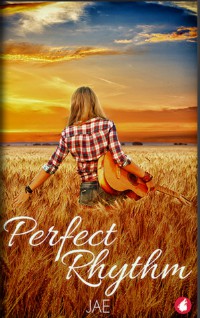 [Trigger warning for the death of a parent.]

When pop star Jenna Blake gets a call from her mom saying her dad has had a stroke, she returns home to her small hometown of Fair Oaks, Missouri for the first time in five years, and goes back to being Leontyne Blake once more. As she works on rebuilding her relationship with her parents, she begins to evaluate what exactly she wants from life–all while getting closer and closer to Holly, her former high school classmate and her dad’s stay-at-home nurse (small-town life, y’all). On her end, Holly goes from thinking Leo is a self-absorbed jerk, to counting her as a friend, then maybe more–but first she wants to make sure Leo knows that while she is romantically attracted to women, she is asexual.

It took me a while to get into Perfect Rhythm, but once I did, I was hooked. In part, it takes the novel a while to find its own perfect rhythm: some aspects of the plot and description seem clumsy, especially towards the beginning. Leo’s attraction towards Holly (and her body) seems over-the-top and heavy-handed: there are many descriptions of Leo noticing Holly’s “feminine curves” or doing things like accidentally resting a hand on Holly’s “nicely curved hips,” coupled with Leo spending an inordinate amount of time noticing the fact that Holly is not noticing her (or her body). I’m assuming this is supposed to be tied in with Holly’s asexuality, to contrast how they feel about each other, but it often doesn’t feel authentic (and, at times, Leo’s attitude towards Holly’s body even feels a little gross). The plot in general can also feel a little trite, with regards to how it follows the age-old rom-com story of a big star falling for a small-town girl’s down-to-earth attitude towards fame.

But ultimately I totally fell for the characters, and ended up falling for the plot too, after a bit of a rocky start: that rom-com trope is rejuvenated with a homoromantic asexual woman as half of the (queer!) pairing. The novel does an excellent job showcasing what intimacy and sensuality can look like without being attached to sex, while also depicting what sex can look like for an asexual person and an allosexual person (this particular chapter has a warning for readers who might want to skip a graphic sex scene). And the characters are excellent at modeling how partners with different expectations and needs can make a relationship work–regularly talking things out, stating what they need, being explicit about their boundaries (and accepting of their partner’s boundaries).

One of my romance novel pet peeves is characters who just can’t seem to talk to each other, but still somehow fall for one another and ride off into the sunset: once Holly and Leo stop operating off of their assumptions and spend time talking and listening to one another, they have a beautiful relationship that feels so very real to me. The story centers itself for the most part on Leo’s perspective, so Holly’s character is not quite as fleshed out, but Leo’s journey is absolutely moving and satisfying.

The plot of Perfect Rhythm is also pleasantly multifaceted: the main focus is on Leo’s growing relationship with Holly, and the associated obstacles along the way, but Jae depicts other facets of Leo’s life: her relationship with her family and small-town Fair Oaks, her unhappiness with her life of stardom, her father’s infirmity (and eventual death). It’s also a story of a queer woman coming back to her small hometown and finding more acceptance and happiness there that she could have thought possible, rewriting a common narrative that so often depicts the opposite, much like Rachel Spangler’s The Long Way Home (another excellent romance novel).

Perfect Rhythm is a sweet romance novel that, despite a perhaps shaky beginning, ultimately captivates the reader and showcases the blooming of a delightful relationship. It’s definitely worth a read, especially if you’re into romances that showcase not only a beautiful romance and lead-up to a relationship, but also the thoughtful communication that keeps relationships going. Swoon!