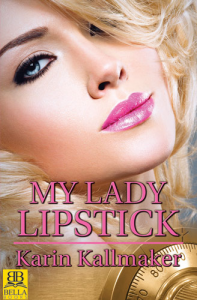 Anita Topaz is a best-selling author of popular bodice rippers. But Anita doesn’t actually exist: she’s just a pen name. Paris Jackson uses a pseudonym to help her keep her distance from the world: after experiencing intense online harassment, she is trying to live off the grid and manage her anxiety. When Paris’s publishers decide they want her to come to an in-person meeting to discuss her contract, she isn’t sure if her anxiety will be able to handle it. Enter Lady Diana Beckinsale, a woman with many alternate identities, who harbors just as many secrets: after a chance meeting, she catches a whiff of Paris’s dilemma and jumps at the chance to use her acting talents and advance her own agenda. As with any good romance, as the plot thickens the two begin to fall for one another, as they get to know each other – and themselves – better than they could ever have imagined.
My Lady Lipstick is a sweetly enchanting romance novel. The plot is improbable, but in an entirely endearing and campy way. The character of Diana, especially, has quite the backstory (*spoilers ahead*): she is a former competitive gymnast who now moonlights as an actress using various false identities so she can accomplish her true goal of stealing and repatriating cultural artifacts from unethical private owners. (What a badass!) (end spoilers) And the romance Paris and Diana share is a very tender one: they dance around coming together and pulling away as they navigate their own issues and insecurities.
One area where there is some room for improvement is how Kallmaker brings up Paris’s race. Given the general landscape of romances being so overwhelmingly white, it’s awesome that Paris is a queer, butch woman of color. But Kallmaker kind of tiptoes around this fact, with lots of references to Paris’s “light brown skin” and a moment where Paris reveals she didn’t know she had Central and South American ancestry until she’d done a DNA test after her mom passed away (a moment which is followed up by a cringey comment from Diana about this being why Paris “[mamboes] so well”). With the romance landscape as white as it is, it feels like Paris’s identity as a woman of color should be done more justice, instead of being an odd footnote in her very own life.
The novel raises other issues that Kallmaker and her characters handle excellently. Paris’s anxiety is one. Due to a Gamergate-like response from furiously misogynistic video game fans to a critique of hers, she escaped from her former life in the video game industry (leaving behind her job, her girlfriend, and her home) and made a new life for herself in a coastal Massachusetts town. This experience has left her with heightened anxiety, which Kallmaker depicts in full, from her conception of the feelings as Boss Anxiety (a cute nod to her love of video games) to her coping strategies (deep breathing, visualization exercises, baking). And the nod to Gamergate, as well as a nod to the #MeToo movement (embodied by a slimy publishing executive), bring in a strong undercurrent of feminism. This is a romance novel with a lot of thoughtfulness behind it, one that showcases real, internal struggles instead of a sequence of external obstacles neatly resolved before the happy ending.
My Lady Lipstick is a well-written, reflective, and engrossing romance, with a thoroughly enjoyable plot: Paris and Diana’s connection, and their stunning range of emotions, go straight to your heart.