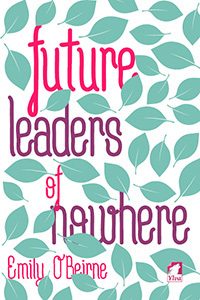 Finn takes a break from high school in Melbourne to attend a camp for high-achieving students who are “future leaders.” There she is elected to lead her classmates as they compete against teams from other schools, and she meets a fellow young leader who intrigues her: serious, driven Willa. With their teams, they work to do well at the camp’s month-long competition (and, while they’re at it, outwit one of the other leaders, Drew, referred to alternately as “douche,” “turd boy,” and “idiot kid”). As the game progresses, Finn and Willa get to know each other better despite their rivalry – and begin to fall for one another, navigating their feelings on top of the competition’s complexities and struggles in their personal lives

​.​The first half of the Future Leaders of Nowhere is told from Finn’s perspective, and the second half from Willa’s: together their perspectives weave not only a delightful romance, but also a compelling narrative of young adults on an emotional journey to find themselves and their place in the world. Though the outer framework of the game is a slightly convoluted plot element, it does the trick in terms of providing external conflict and helping get Finn and Willa together, and its machinations don’t detract too much from the character arcs. Finn and Willa are both engaging, endearing characters – as a reader, you root for them to end up with one another, but you also root for their individual character development, and for the external storyline (winning the game!).

Representation matters – and O’Beirne does a deft job composing a diverse cast of characters​,​without heavy-handedness. Willa is confidently a lesbian, and Finn is unapologetically and unquestioningly bisexual. Willa is also multiracial (her mother is Indian and her father is white), and many of the secondary characters are people of color as well – O’Beirne’s descriptions of her characters are natural and flow into the story without giving pause, though these details are for the most part relatively minor and don’t unpack much of the characters’ identities as people of color in Australia​.

With Future Leaders of Nowhere, O’Beirne has crafted another excellent young adult novel, replicating many of the strengths of her previous novel, Here’s the Thing (which was published in November 2016, and which I reviewed for the Lesbrary in December): both novels boast appealing characters, a queer relationship that draws the reader in (and a thoughtful – if perhaps occasionally overly intricate – storyline that revolves around more than the relationship), and relatable emotional journeys. Future Leaders of Nowhere is well worth the read if you are into captivating queer YA – make sure to pick it up before the upcoming publication of its sequel, All the Ways to Here.