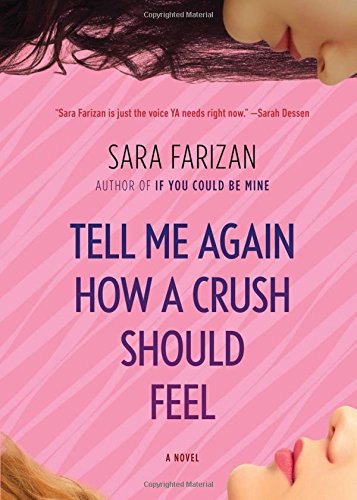 I have to start out by saying that I love this title (and the cover is nice as well). Every time I would glance over at the title I’d think Right? What a great encapsulation of the lesbian high school experience. (I also had a Facebook friend comment on my Goodreads post that I had finished this book by saying that she thought this was a link to an advice column and was disappointed that she was not actually going to read advice for how a crush should feel. Someone get on that.)

This is a lesbian young adult book about Leila, and Iranian-American girl who goes to a prestigious academy, and she is already fully aware of her own gayness, no one else knows it yet. She isn’t ready to come out to her traditional Iranian parents, but at least her closeted life is made easier by the fact that she’s grown up around most of her classmates and has no romantic interest in any of them. That is, until the new girl show up.

Most of this book I really enjoyed. Leila is a great main character, and because she’s already self-aware of being a lesbian, we great these great mental jokes about being the unknown queer in the group. Typical for YA, this is a really quick read, and even most of the side characters seem developed and interesting. Overall, it didn’t totally blow me away, but it got me to thinking that maybe I’m starting to have more difficulty getting into YA books as I’ve gotten older. I think most teenagers would enjoy this, and I am glad to see YA with a lesbian of colour main character.

Unfortunately, I did have one issue with this book, and it’s a spoiler. Highlight below to read.

It’s funny that one of the minor characters in this book aspires to be a vampire, because Saskia, the initial love interest, seems act like one. I saw the twist coming, but even still, she becomes an almost cartoonish villain. And that’s not entirely unrealistic–I don’t want to say that people like her don’t exist–but it seemed out of place when the rest of the story is more about subtle changes, from Lisa dealing with her grief to Leila finding the strength to slowly come out to a selection of trustworthy people.

I also wondered if Saskia fit into the villainous bisexual trope. Part of Leila’s anger is because, at least in her view, Saskia cheated on her with a guy. (Her best friend, to be precise.) Saskia may identify as straight, but she certaintly plays the role of this villainous bisexual seductress (see the vampire analogy?) This might have been compensated for by Lisa identifying as bi, at least evening out the representation, but although the word “bi” is mentioned in the book, Lisa rejects it, saying she doesn’t want a label. (Which is fine for an individual to say, but bi representation in media has notoriously shied away from actually using the word “bisexual”.)

So I found that part disappointing, and it overshadowed the book for me.