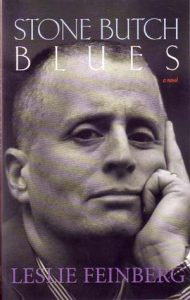 Ever since I learnt about Stone Butch Blues by Leslie Feinberg I’ve wanted to read it, but I knew it would be an intense book to read with quite a lot of violence in it, so I waited till I thought I might be slightly more ready for it. The time to read it arrived since, last year sometime, I learnt that I was a high femme (sometimes called a stone femme) and I knew then I had to pick it up because stone butches are important to me, because I wanted to learn more about lesbian history, because I wanted to read the sex scenes, because I’m lonely [stonely, if you will] and I thought it might offer me some companionship and some hope.

The book itself took me a long time to read because I started it in 2018 read a third or so and found it so triggering and upsetting I had to take a long break (there’s sexual, homophobic & police violence in it) Then in may I decided I was ready to pick it up again, this time as a physical version [I had been reading the pdf, downloadable here] and that helped me read it all the way through. I decided to just keep reading from where I had got to because I could mostly remember what had previously happened and so I sped through the last two thirds and finished the book in about 5 days, crying pretty regularly through it.

Stone Butch Blues is an iconic piece of lesbian and trans fiction. It’s about Jess, a jewish baby butch on a gender journey who is growing into herself pre-stonewall era (although it extends to post-stonewall too!). The novel follows her growing more and less into herself, in a lyrical and winding narrative. It’s an ode to the strength of gender nonconforming people, to the reality of loneliness, it’s about class war and lesbian resistance, it’s about community and healing and violence. Jess is by no means perfect, but following her through her life is such a gritty and precious experience.

The book itself was written in the nineties so it’s technically a historical fiction novel but it feels so present and alive, it’s hard to categorise it as such. It’s so full of vulnerability and rawness it’s hard to think of it not as real life. What shines through the novel is love and solidarity; a love for butchness, for femmes, for people who dont make sense or fit in, for people who are not women and are not men, for working class people, and by the end even maybe for communists (!).

I can’t synthesise this book in a way that feels entirely accurate, which is why this is more of a list than a review, but that’s because it’s such a transcendent, enthralling novel and it pulls you by the ears into the pages and holds your heart inside it’s spine long after you’ve read the last word on the last page.